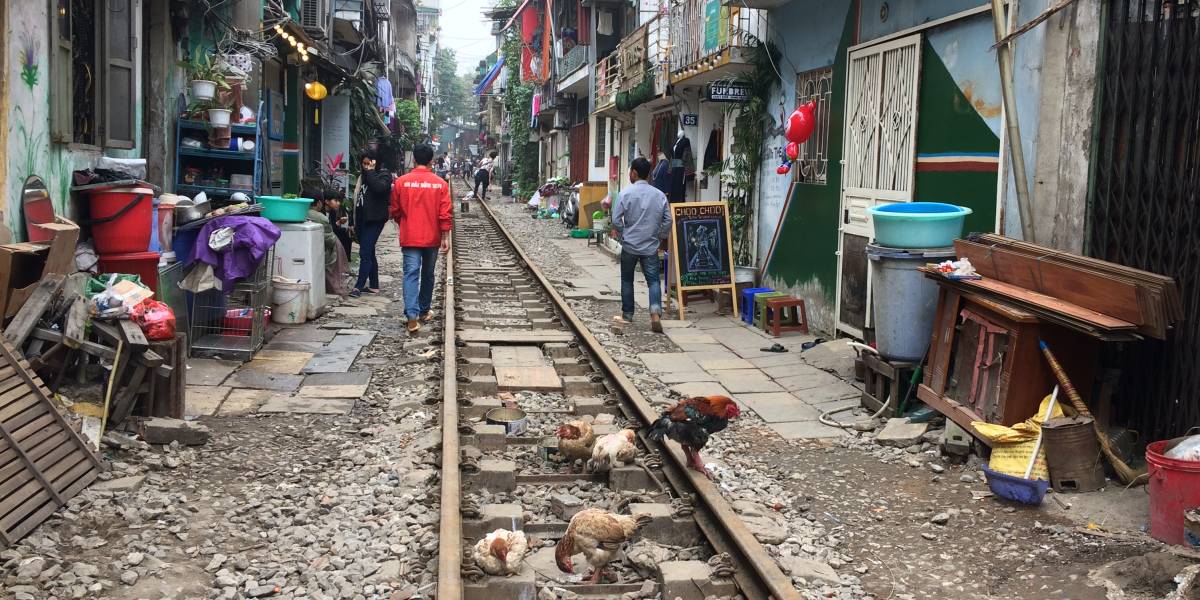 I just close my eyes to recall how Hanoi was. I was tired, and had my ever first stomach issue during the trip, the air was polluted, it was raining, but still I smiled all the time. The scents, the street food, the bustling night life, the memories of a long-gone world wherever I looked. Hmmm. Did it become my favorite city? No. But definitely didn’t mind to spend 4 days, an unusually long time here. 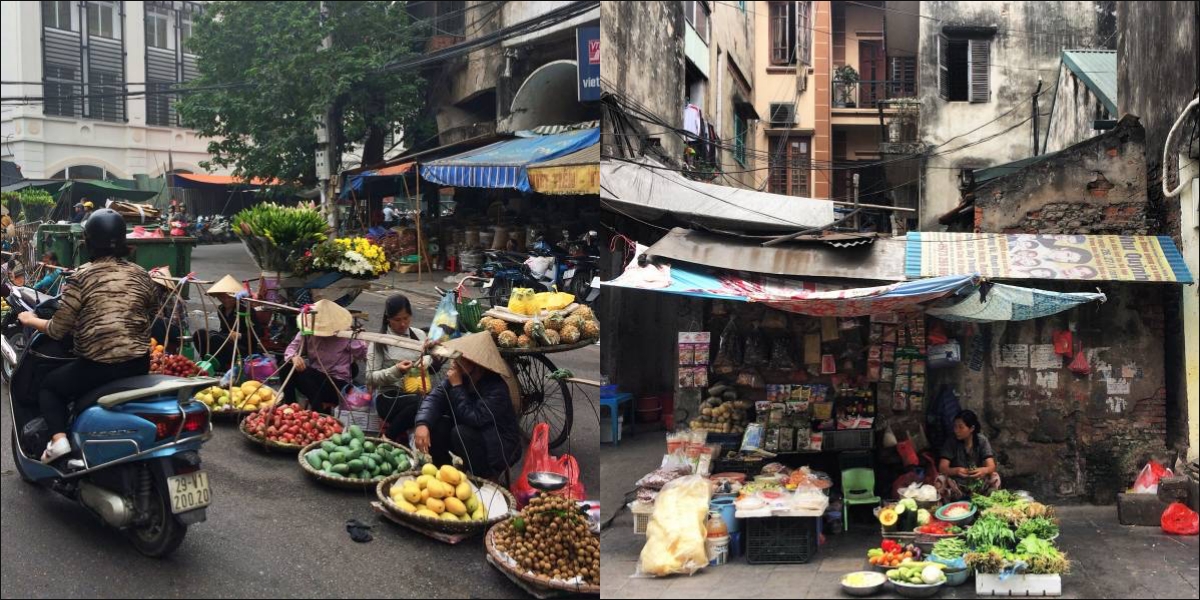 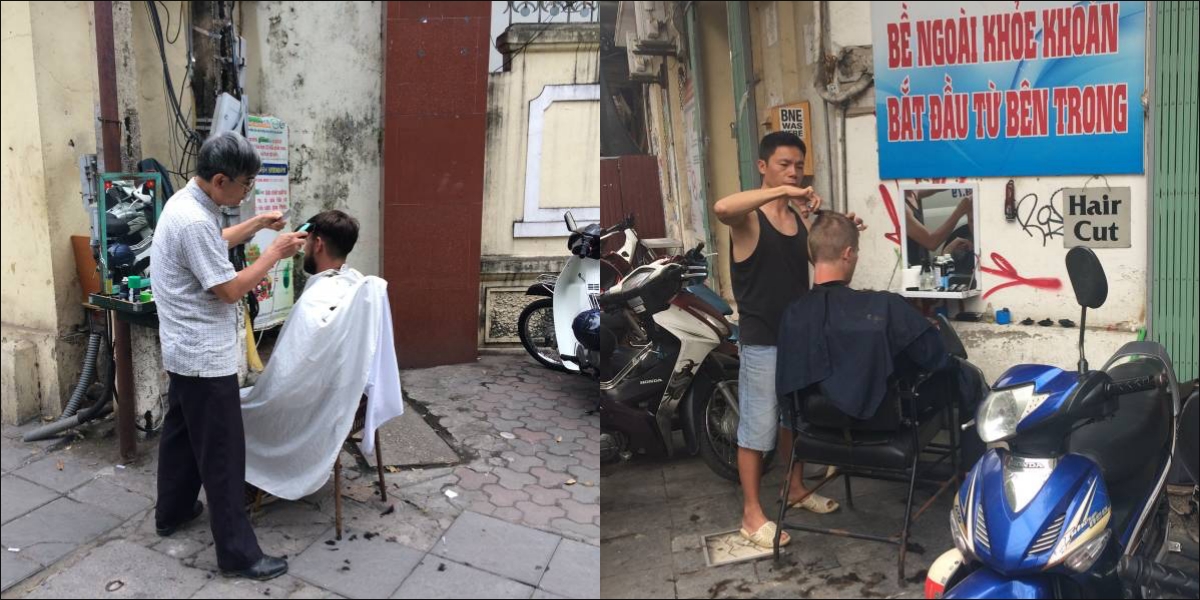 It happened that the weather front reaching Cat Ba Island brought rain and cold, and basically it covered the world North of Hue, so there was no escape or plan B. I decided to go and stay in Hanoi and not to go anywhere else before returning home. I got on the bus and found myself in Hanoi already on Saturday night, with Keith.

We checked in to the hostel and walked into the craziness of Old Town right away. Saturday and Sunday nights are special in Hanoi. The night market is on and the roads running along the shores of Hoàn Kiem Lake in Old Town are closed, get reserved for pedestrians. At every corner an upcoming artist or a neighborhood talent present their show to the audience and the crowd walking by. Saturday night, after dinner, I discovered it all alone. I was unexpectedly attracted to the city, was like a magnet to me. No, believe me, the night market is not special. It is just like every other night market in other Asian cities. But I just loved the vibe. I walked the streets, enjoying the crowd and the smell of food. It started to rain, but it didn’t hold me back either. Hanoi won me over, irrevocably. 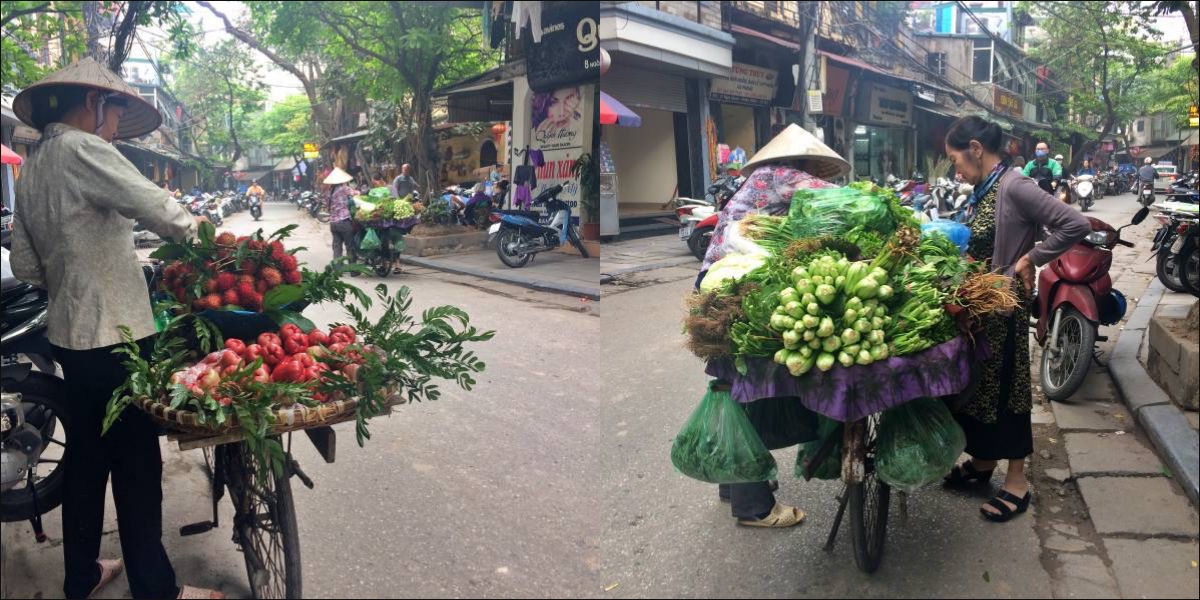 The next day we both moved to another hostel, Keith and I went on our separate ways. Our budget was a bit different, but everything in Old Town is super close, so staying at separate places did not prevent us roaming the roads of Hanoi together. And not only the two of us. It turned out that Brendan, the Dutch guy I got to know in Hoi An, was in Hanoi as well, so we met him in a café and the “Hoi An crew” got together again to discover the capital this time. What were the chances? Amazing, right? 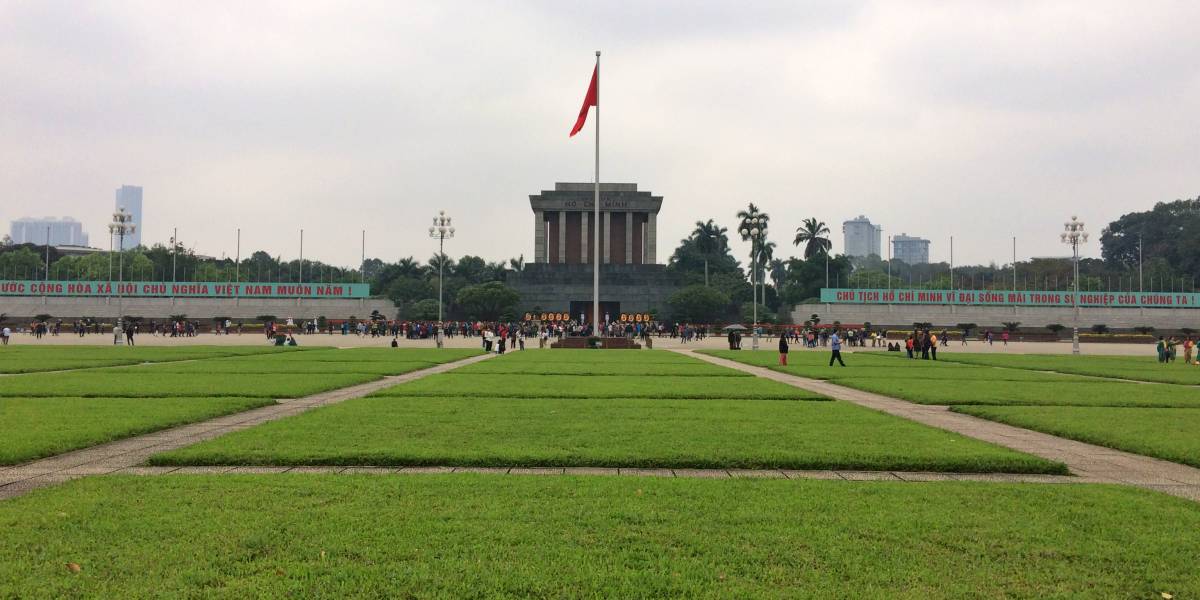 We were so much into our conversation that I don’t even remember how we got to the Ho Chi Minh Mausoleum. Not that I was interested in checking out the embalmed body of Uncle Ho, but rather wanted to see his house behind the Mausoleum – formerly the “kingdom” of the French governor, later the home and workplace of Ho Chi Minh. We arrived to the gates just before they  opened them the for the afternoon. We went in with the waves of people who gathered here during lunch break, and walked through the buildings on the French villa-complex. You can’t actually enter to the buildings, just walk around them. The place is not simple and not humble, as the signs would indicate. But who believes in the signs and in what politicians say, right? I repeatedly got the security guards displeased because I was not walking at the expected pace and stopped taking photos here and there, so they had to call me out a couple of times. Of course, as a counter attack, I went into rebel mode and I kept disregarding the stupid rules. 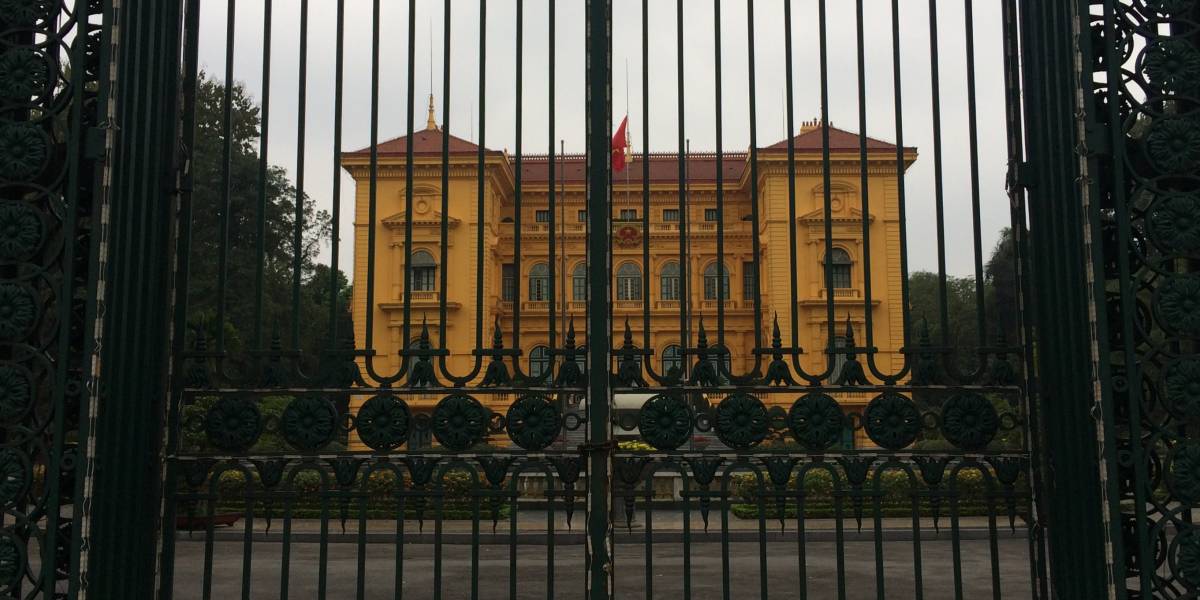 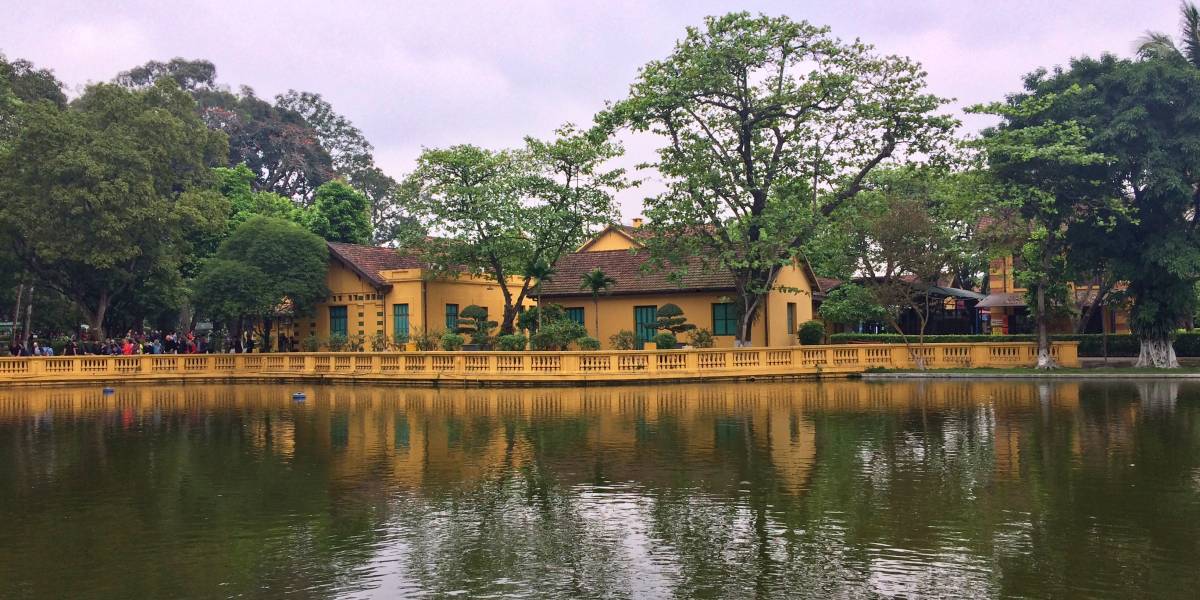 And so did the next few days go: I discovered the city with Brendan or with Keith, with both of them, or just by myself.

I visited the Vietnamese Women’s Museum, which I truly liked, except for the section of viet propaganda. The exhibitions on the different tribal traditions of wedding and family life; the show featuring rural farming life and a wide variety of tribal, traditional clothing and fashion are amazing and super interesting. The section on the role of women in history would have been superfluous if they were to present the many freedom fighters, heroes and revolutionary women fighting the Chinese oppressors in many creative ways. Instead it is focused on depicting female soldiers of the Vietnam War with painful detail. This is something that is typical for Vietnam: the Vietnam War and the defeat of the US is on show everywhere. The demonstration of the many unjustified suffering, the pride of the winners, the many shot planes, the humiliation of the hated enemy are emphasized. I understand, but all this is too much, it is overwhelming. To me. Anyway, I felt the Western people’s shame because of the losses (human life, health, cultural heritage, nature) that this people suffered – but really, historically I have little to do with that. But it was pushed into my face all the time, wherever I looked.

I visited the Confucian Temple of Hanoi, the Temple of Literature. The tiny island of tranquility in the super busy city, with many art school students drawing or painting one of the many courtyards and gates. I walked to St. Joseph’s Cathedral, where I figured out, that Jesus is depicted as a Caucasian, white man in in this corner of the world as well.

The phenomenon of the train street in Hanoi became one of my favorites. The train street is an approx. 500-meter stretch of road between the houses, with railroads instead of an ordinary road. Although there is no car traffic, there is a train to/from Haiphong a few times a day. As the schedule is public, at these times hundreds of tourists are gathered here to film, photograph this scene, even at the risk of injuring themselves. The locals also responded to the attraction-tsunami fueled by instagram and social media, so there were countless cafes and “restaurants” here to rip off tourists. Often, the tables are in front of the neighbor’s doorway, and when the not-so-happy neighbor returns home, the staff of the cafes have to pack quickly and move away. 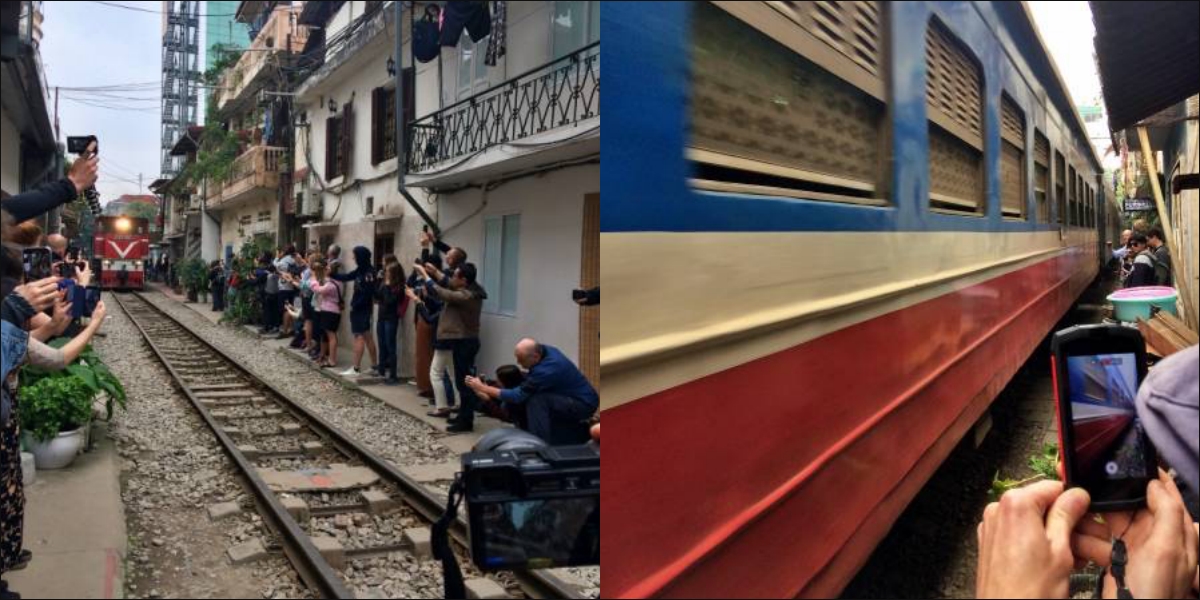 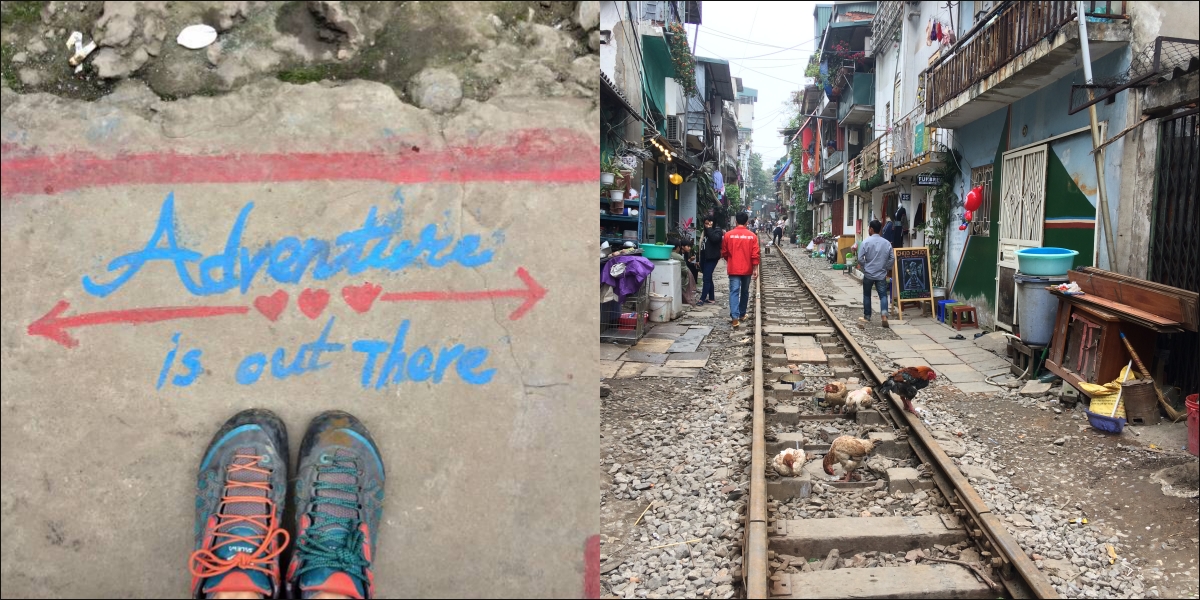 We also visited the Thang Long Citadel. I expected to see something like the Hue citadel, especially when I learned that this area became an UNESCO World Heritage Site. But it was quite disappointing. An extensive archaeological work is going on here, but the damage done by the time and the French colonists simply ruined this “attraction”. I was thinking a lot about human nature, especially after the recent events in Paris. Many have described already how frustrating it is that Euro millions were collected in a moment to rebuild the Notre Damme, while centuries-old historical and cultural monuments are totally destroyed by the devastating expansion of Western civilization without anyone trying to save them. All of this happens because they were not created on the “right” side of the world, and are not in line with the preferred Western, Christian values. This makes me super sad.

Later I visited the West Lake, checked the Tran Quoc Pagoda and the famous Bodhi tree, walked through the huge Dong Xuan market many times, I ate divine food at the small food corners sitting on tiny plastic chairs, stuffed my belly with fresh pineapple, checked out many little cafés, I tasted egg coffee again. The only thing I didn’t do was to go to the traditional water puppet show. I was simply not interested. 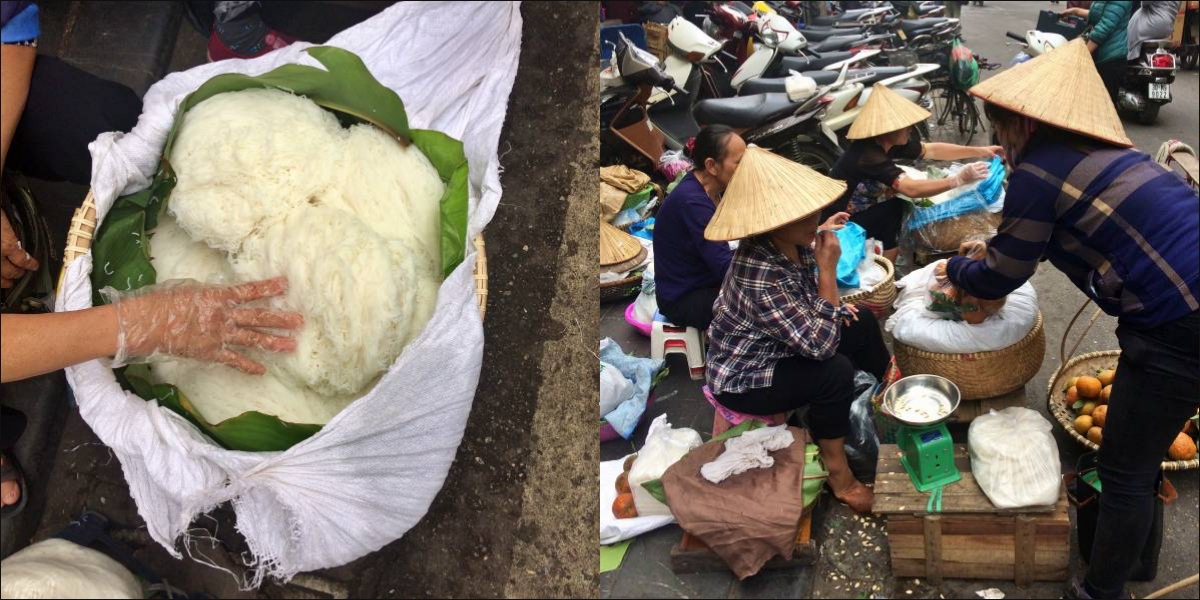 Oh, and once again my flip flops got stolen, but it is an amazing story that deserves a new blog post. You can read it soon!

One day Brendan set off to ride the Ha Giang loop, in spite of receiving worrying news about the north, the bad weather and the ever-worsening road conditions. Keith applied for his Burmese visa. And soon enough I was on my way home. Before I left I managed to find the local alternative to tourist shuttle buses to get to the Hanoi Airport. Bus No. 17. leaves from the Long Bien bus stop, and takes you to the airport way cheaper, than its advertised counterparts.

I said goodbye to the guys, the city and Vietnam, and I started my long journey back to Budapest. I just stayed there for a quick change of clothes and a nice hot shower, and then I traveled on to Zalaszentgrót to catch the day of my dad’s 70th birthday. Luckily I managed to get there on time.

That was Vietnam, as far as the chronicle of travel is concerned. But there are still a couple of posts, lessons learnt, facts & fun facts coming. Keep on reading!