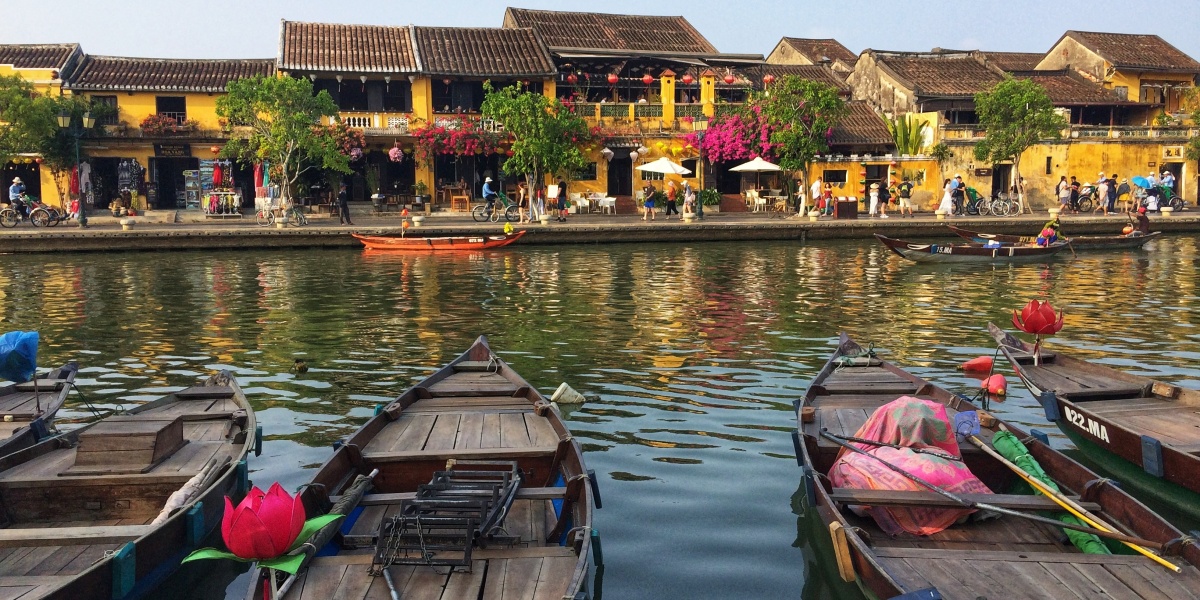 I took a night bus from Dalat in the rain. This time it was the more uncomfortable type if bus, with less space and was unlucky to get an upstairs seat for the curvy roads. Luckily, I could sleep throughout most of the journey and arrived to Hoi An when there was light already. As soon as I left my bag in my hostel, I took off to discover the city. Low lucky I did it: later I figured, that after about 10 in the morning the old town gets super crowded. There are so many tourists, that is hard to take two steps without bumping into each other. But in the early morning the old town is so charming!

The port of Hoi An had incredible importance throughout centuries, and still has a very special atmosphere if you forget about the sugarcoating created for tourists. The city flourished between the 15th and 19th centuries and was a true cosmopolitan place. The rich Chinese and Japanese merchant families established here have left a mark on the city’s architecture, religion, traditions, but there are many marks in the Ancient Town from the French colonial period. Later the more modern and larger ships could no longer reach the town located a bit further inland from the shore, and in the same time due to internal political changes Danang gained more importance and took over the role of the commercial center from Hoi An. Actually it has helped to preserve the forgotten Hoi An’s unique charm. 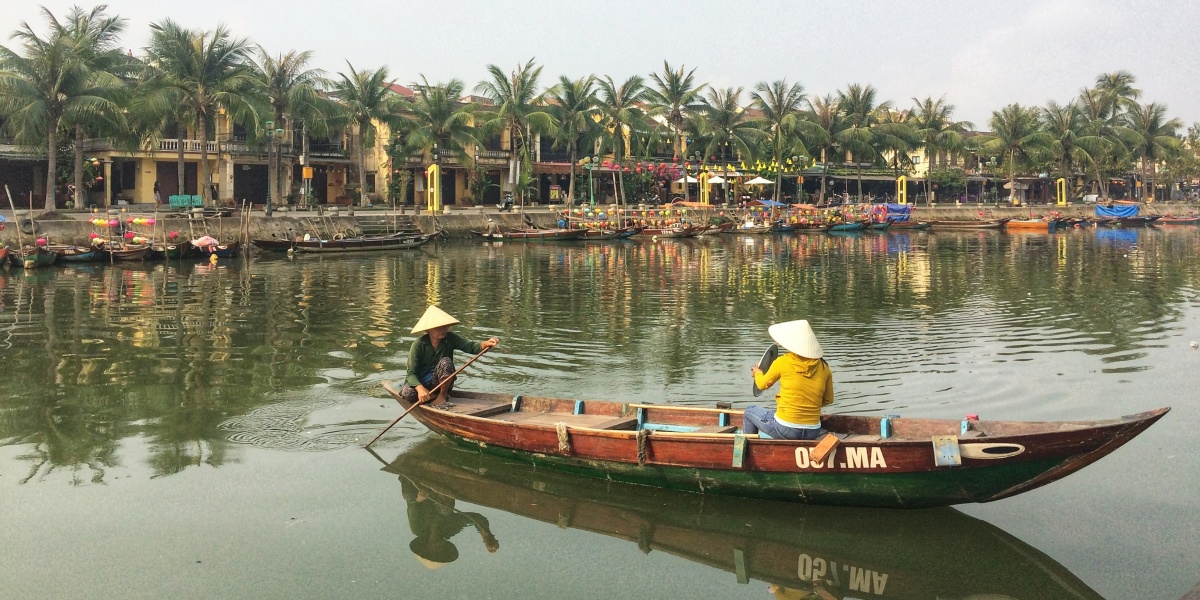 The Old Town can only be visited with a ticket, which you only have to buy once, but it can be requested from you even if you just take short walk on the streets of the old town. In addition, 5 historic buildings can be visited with the very same ticket: churches, houses of merchant families, trading house, assembly halls and the famous Japanese bridge. 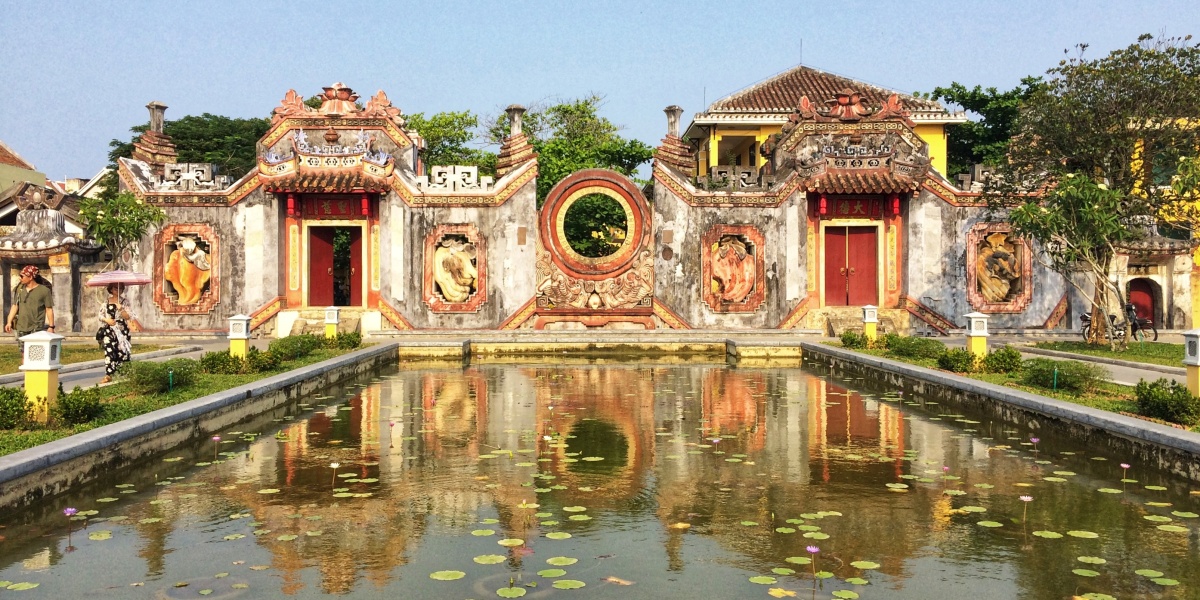 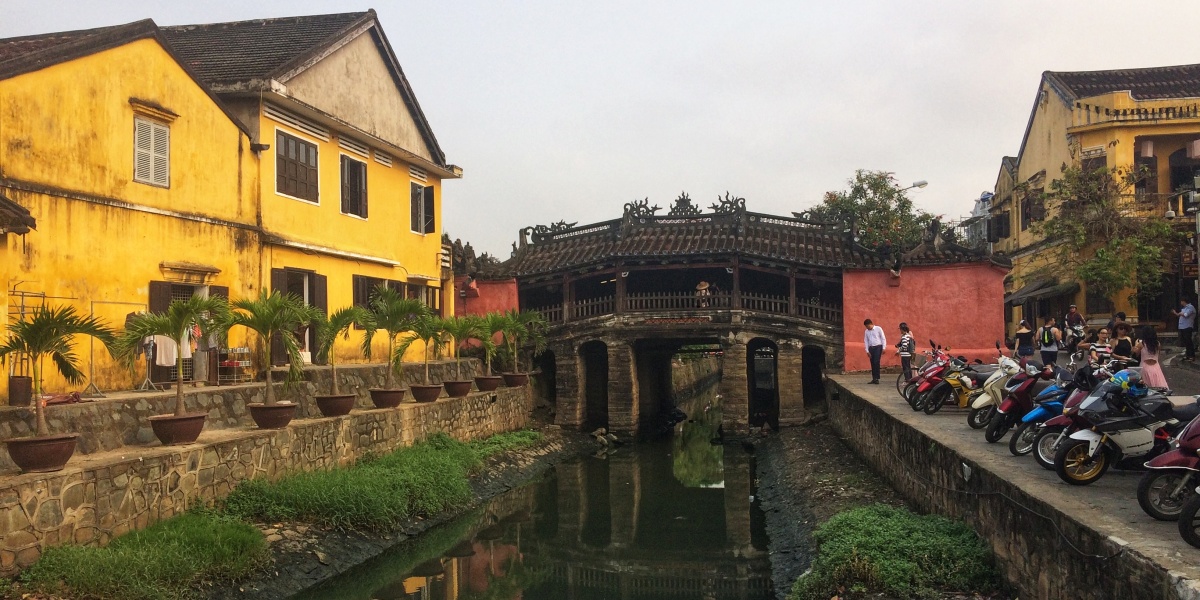 The city is full of tailors and shoemakers, where you can have custom made all kinds of beautiful things, or just walk around the many cafes, ea houses, and the streets decorated with lanterns or the by the canal. It really is a charming little town. I also was super happy to eat amazing food here. Unfortunately I can’t really show it to you, as I kept forgetting to take photos. But don’t expect me to give restaurant recommendations because most of the time I ate at the market. The food stall under E34, served devine food – just saying.

I rented a bike again, and this time I fully dressed up to protect my skin, and took off to the My Son complex the next morning. I started a little late because I could not get motorbike early enough, but I managed to beat the crowds, as there were only two buses in the parking lot (good sign! this number was about 30 when I left…). My Son is a templecomplex that remained from the former Champa Empire. Neither the time nor the American carpet bombing made any good to this place, so only a few of the many temples are in a condition to have an idea of ​​the once beautiful site. 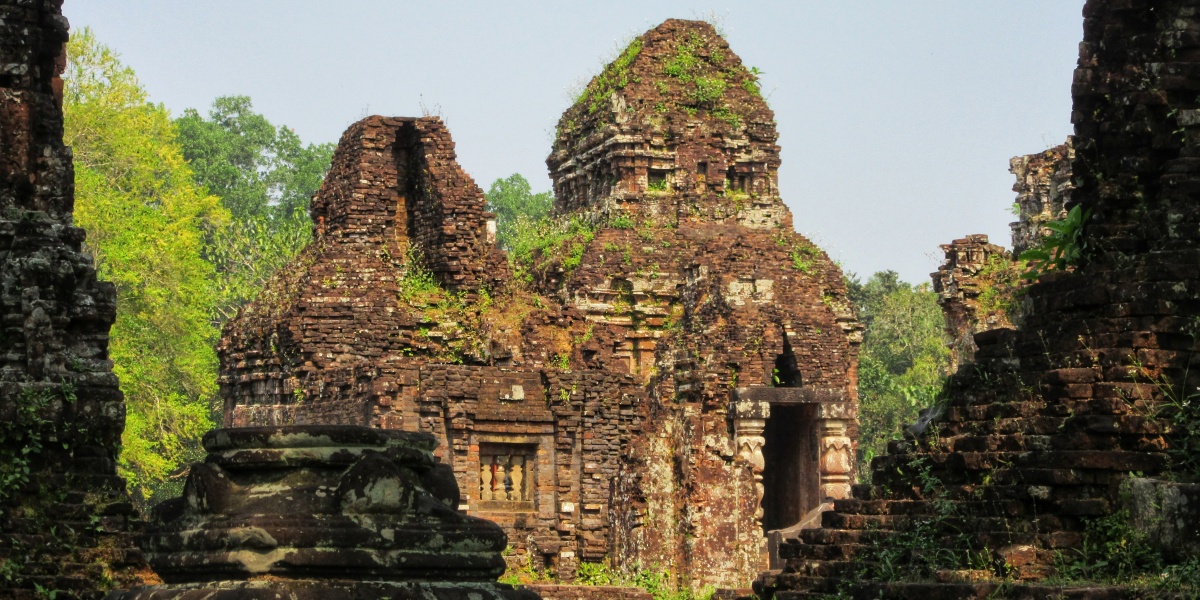 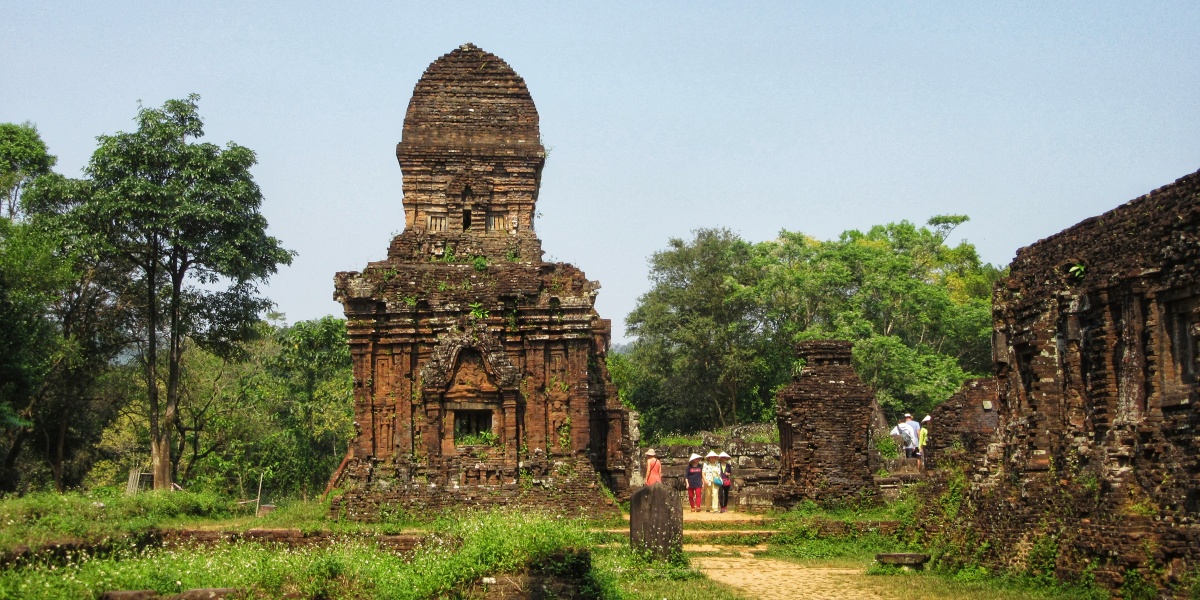 Archaeological and reconstruction works are mostly supported by India and some European countries. There are really a lot of people at the small site, but the groups come in waves and you can marvel the beauty of the ruined temples in the break between them, or listen into the explanations of the guides given in different languages. There is also a folklore show in the mornings, but its authenticity is questionable. Anyway, I just leave it up to you to decide. 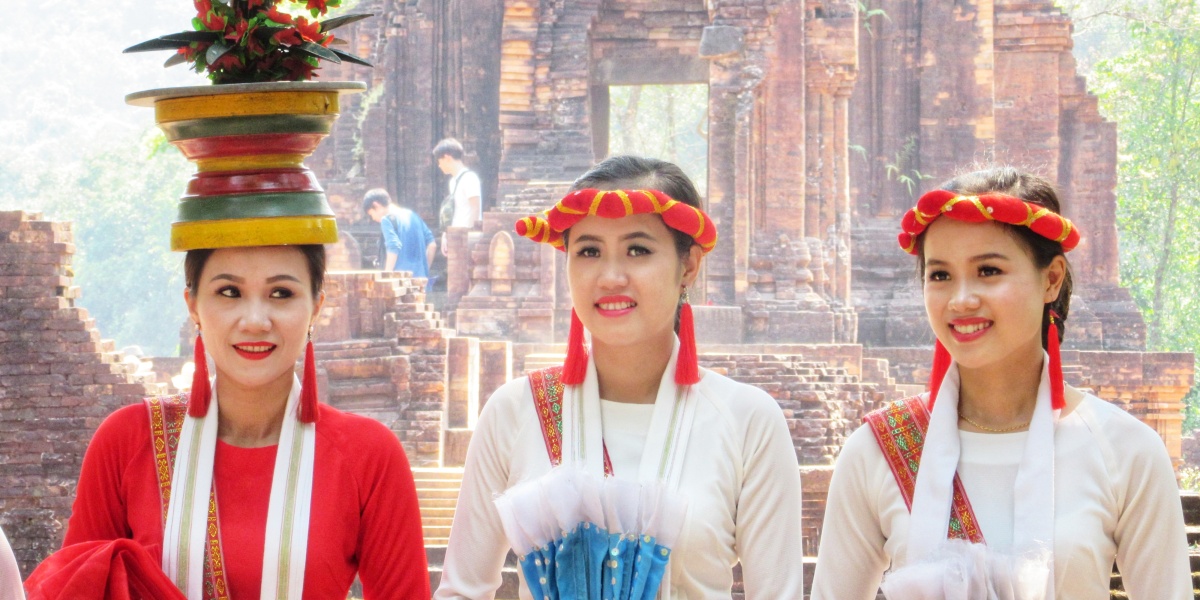 I me the first traveler who paid for the Hang Soon Dong Cave Tour in Hoi An. Many people have not even heard of the national park, not to mention visiting the world’s largest cave after paying a small 3,000 USD fee. But the Canadian Keith does this. The way he’d put it: he is a little older (only 41) and is a bit more established so he can afford it. He’s a unique character: he is a serious apocalypse-believer, there is a bunker beneath the house that he restored himself, in which water and all kinds of food are stored, alongside of water purifier. He could list the items he stores there, but I was so amazed that I forgot to take notes. He will survive for quite some time, when it comes to any kind emergency and not just himself, because it has enough food for more people. Plus, he planned to be the first to throw a frisbee into the largest cave in the world (Hang Soon Dong) from the third largest cave in the world (Hang En), but as I heard later, he forgot the frisbee in Hoi An.

Hoi An is also the base of the Lune Production (www.luneproduction.com) – an art center combining circus, dance and other arts in their performances – since February 2018. As a modern circus fan, it seemed obvious to see a show in the dome shaped Performane Center they had designed. 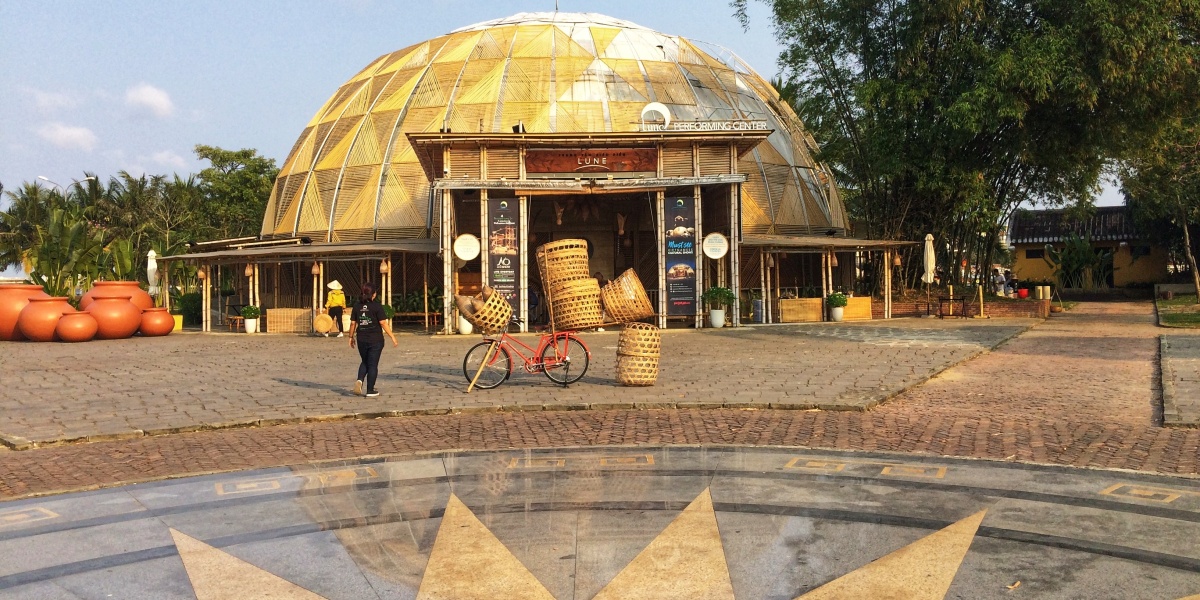 Keith and Brendan joined me, and we watched the one show available this time, the A O Show. It took me a while to overcome the fact, that there’s less acrobatics, but more storytelling and cultural element than I had hoped. But it was a really cool show, well prepared and with really well trained artists.

I was also lucky with the people around me. With my roommates (in Vietnam they tend to think that I’m a male, confusing my family name with my first name, and I’m almost always the only girl in the room) we talked a lot about world world politics, travels, the influence of colonial powers in today’s third world countries. I love being surrounded by very diverse company with a wide range of experience and knowledge.

In the hostel, I also met Debbie  from California, a 60+ backpacker. She decided over sixty that to travel for a few years. She mostly volunteers for a longer period of time in a country and has now come to explore the country what she is visiting, beside volunteering. As she said, every traveler is going through a big change and looking for an answer to the eternal question: what’s next. The 18-year-olds who have a gap year, the ones who just got divorced, the ones quitting their jobs or the ones in midlife crisis … her daughter just moved out, is at university, and her nest is empty. “Aren’t we all the same?”