Ijen and the Blue Fire 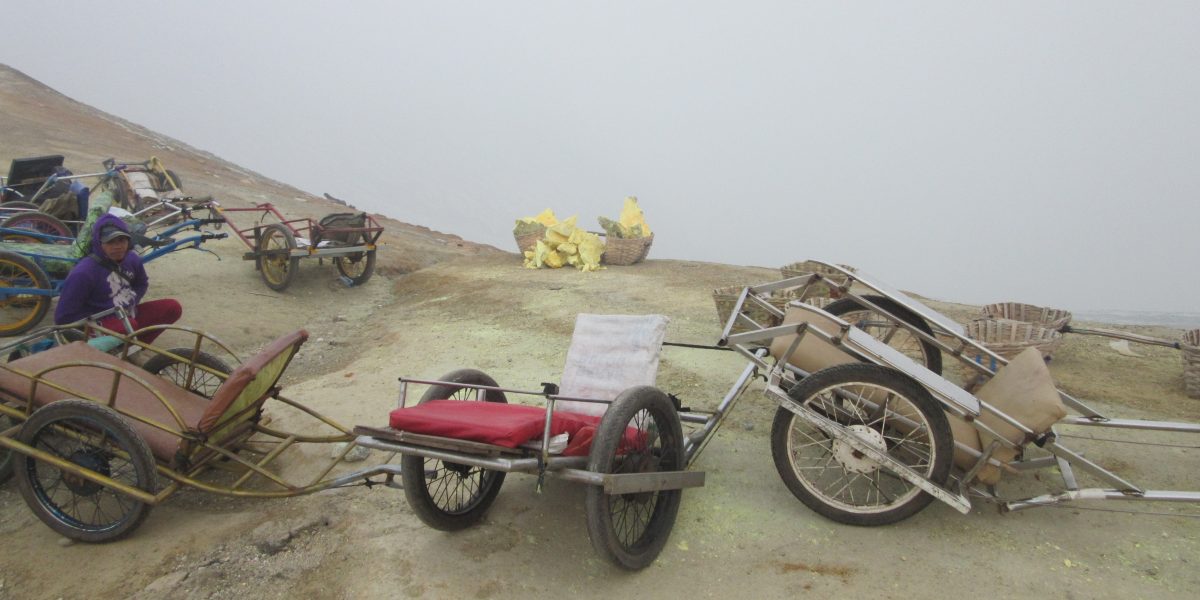 I wake up at 1 am and – what a surprise – I walk up to a mountain again. The destination is the Ijen volcano, but this time I won’t watch the colorful sunrise. This is something completely different. Kawah Ijen became famous thanks to its beautiful blue lights, that appeared on the fotos of a French photographer and made it to the mass media a couple of years ago. They called it blue lava. Kawah Ijen is an active volcano with a sulfur mine in its crater. The crater lake has beautiful colors, is super acidic, with a high sulfuric acid concentration and pH 0,5. The hordes of tourist visit this place because of the blue fire, that is visible only during the night. The blue light is basically the flame of sulfuric gases that catch fire when leaving the volcano and meeting oxigen.

The visitor arrives to the crater around 4 am, and till the 5 am sunrise there is plenty of time to walk around in the crater, enjoy the view of unearthly flames, watching the methods of sulfur mining in disbelief and intend to take good photos without success. 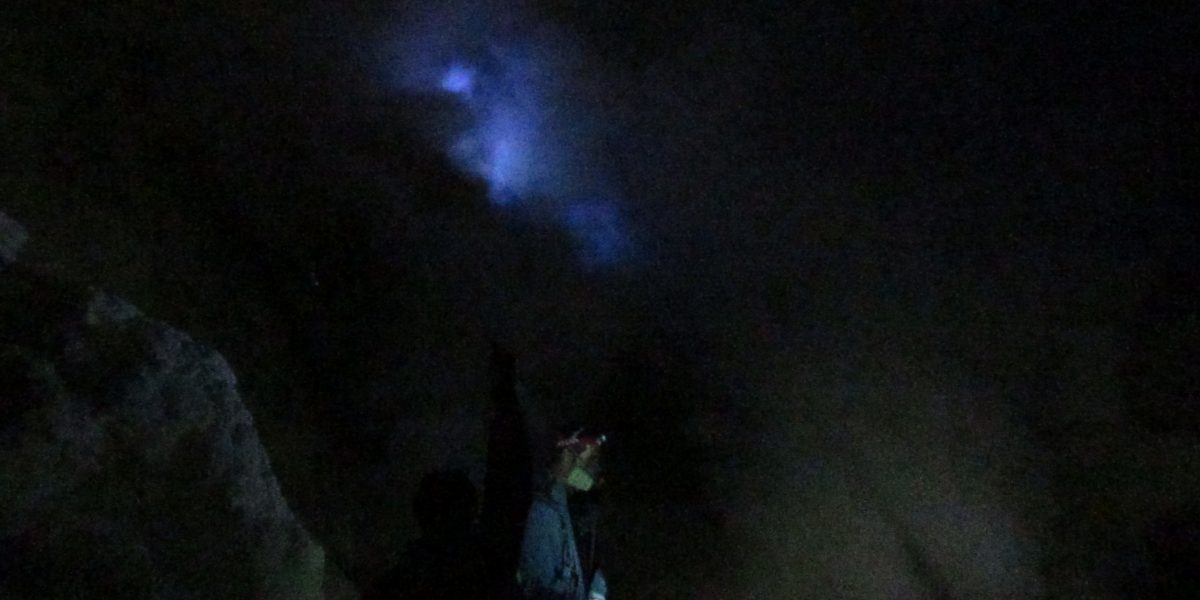 After sunrise it is recommended to leave the crater, as the gas entering the air gets more intense, the blue fire is not visible anymore, and though the tourists wear gas masks, breathing gets harder and harder. 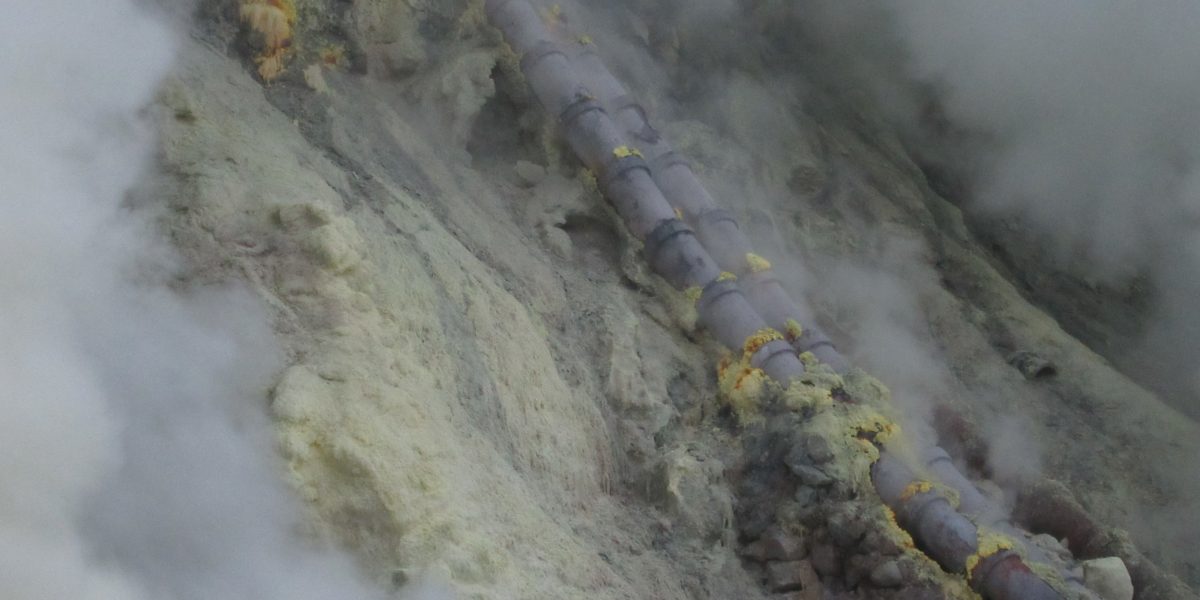 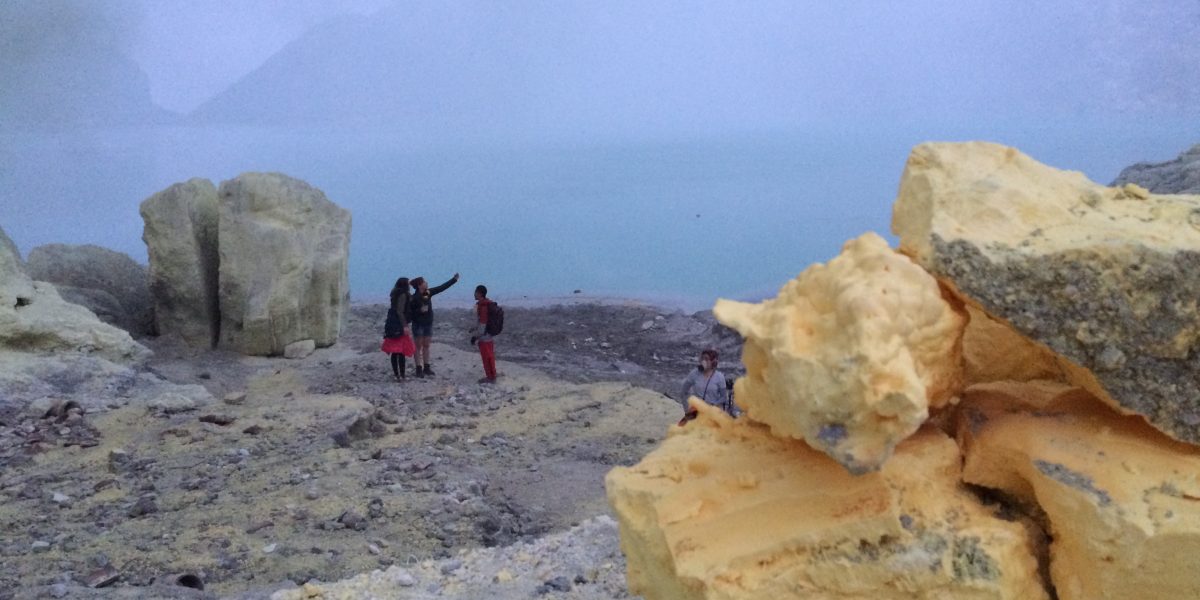 On the way to the crater rim and obviously in the crater as well the visitor meets the miners who intend to get some extra money by offering taxi services to the lazy/less fit tourists. The taxi itself is a carriage, pulled by two and pushed upwards by one miner. The other popular option is to sell small sulfur figures, and as I saw, people actually buy them. The miners really need the extra income, as mining doesn’t pay too well compared to how dangerous it is. As my host in Ijen, Supri (who also works in the mine when less tourist come to his village) said: “I fear every day that the mine will kill me. But I fear more not having enough money to feed my family.” The mine is operated by pure man power, the miners break the cooled sulfur into large pieces, put them into a pair of baskets, and balance the bamboo stick holding the two loaded baskets on one shoulder while climbing up to the crater rim. From there they go downhill to the foot of the volcano and bring it to the a station to be weighed, as the salary is based on the weight of the sulfur they carried. They work without gas masks and without any protective equipment. Toxic gases can leave the crater lake or the cracks in the crater any time, so they risk their lives with every minute spent in the mine. I heard different data from different miners, but they say they earn between 17 and 70 thousand IRD a day (1,2 – 3 USD). And no, Indonesia is not super cheap.

You can use the “taxi service” downhill as well, but it is quick to reach the parking lot anyway. And everyone rushes to his/her next destination from here. So did I. My host dropped me at the train station – real public transportation, finally – and though I waited two hours for the train, I was on my way to my next destination. I traveled together with Joe. I met him first while descending from Ijen and he talked about his travel plans to someone. I was really glad to meet him, as our interim stop (Probolinggo), especially its bus station is not the safest place for a tourist in East Java. There’s a lot of reported scam, but authorities do nothing. We were waiting more than two hours for the minibus. By design the minibus leaves, when it is full (15 people), and there is no schedule. Three French backpackers were waiting there already – just arrived a couple of minutes before us. Later the two previously met Canadian girl joined us, plus a Polish couple. The French gave up after a while and decided to skip Bromo. We were only the six of us, soon getting dark, knowing we get up early next morning, without any chance to have 9 more passengers to fill up the bus. So we decided to leave anyway and divide the price of the bus among us, so we payed 85 thousand IDR, instead of 35.000. When we arrived to Cemoro Lawang we heard, that the previous bus left with only 8 people on board and they even saw the French arriving. We all could’ve fit into one bus, but the driver decided to leave to have one more drive for sure to maximize his profit for that day…

Luckily I have a place booked, so I don’t need to look for accommodation in the dark, as Joe and the girls. The Polish couple camp at one of the viewpoints, which is a great idea. Cemoro Lawang is not a picturesque little village, and though none of us tried the expensive hotels, the general experience is, that the places to stay have a very low standard.

I politely refused all amazingly expensive offer to organise my day, agreed to join two Danish guy who also planned the day without a local guide, and went to sleep. It was a really long day.

Tags: asia, java, travel
Arriving to Java
Bromo, a dream to come through