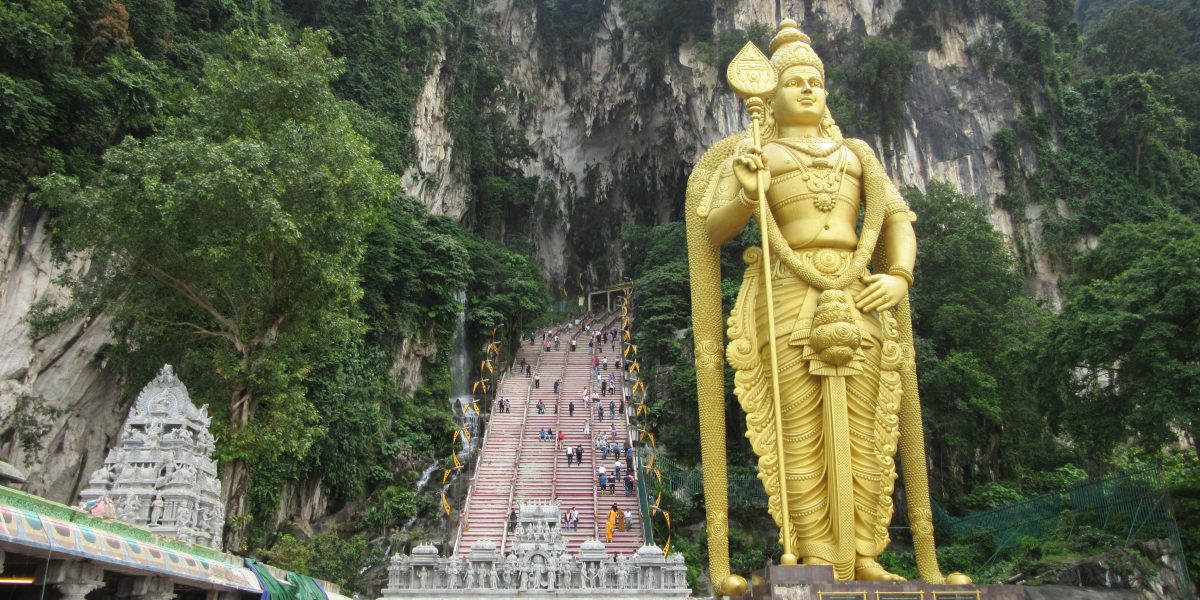 When I planned this travel, I considered Kuala Lumpur as a possible gateway to Asia, but finally I chose Singapore instead. Now, one month after I left Hungary I arrived here, as a transit destination between my travels in Indonesia and Thailand. As AirAsia modified my flight, I had only one full day here. Thanks to Mina, I got a gorgeous place to stay, so I was really looking forward to arrive.

KL is really far, 60 km away from the airport. Even though it is not difficult to get into the city center, it is not really quick.as a real backpacker I chose the cheapest option, the bus. As Grab/Uber is actually working here well, if you are not a solo traveler, you might consider using it. All the buses and trains from the airport arrive to KL Sentral where you can change to the metro lines. Instead of a paper ticket or a chipcard you get a small plastic coin with a chip inside, that you drop into the exit gates to leave the station.

So, I was good so far. I quickly arrived to the closest metro station to my hostel, where I got stuck. I realised, that I have no offline map, no mobile data to use and have no clue how I will find the building. In KL the buildings have no numbers – the address contains the name of the street and the bloc. I figured I ask some people, I may be lucky that they 1) speak English, 2) know the address or check it on an online map. It didn’t work, three people sent me to three different directions. At this point it started to rain, disabling any further research, as nobody was on the street. Plus I had a deadline to get to the hostel, and I was already running late. Cool. I was tired, soaked, and frustrated to be late – I was not exactly happy. My savior was a lazily smoking local having shelter at the same spot where I did, not in a hurry to move on because of the rain. He spent more than a single second when checking the map for me, and was sure about the direction. When I had doubts later, there was always a security guard or a taxi driver to help. I almost walked by the building, s ig is not optimized for pedestrians, and you actually have to cross a construction area. It looked like a “too good to be true” story again.

But the place is actually superb. Five star hostel, as Alvin, the manager says. 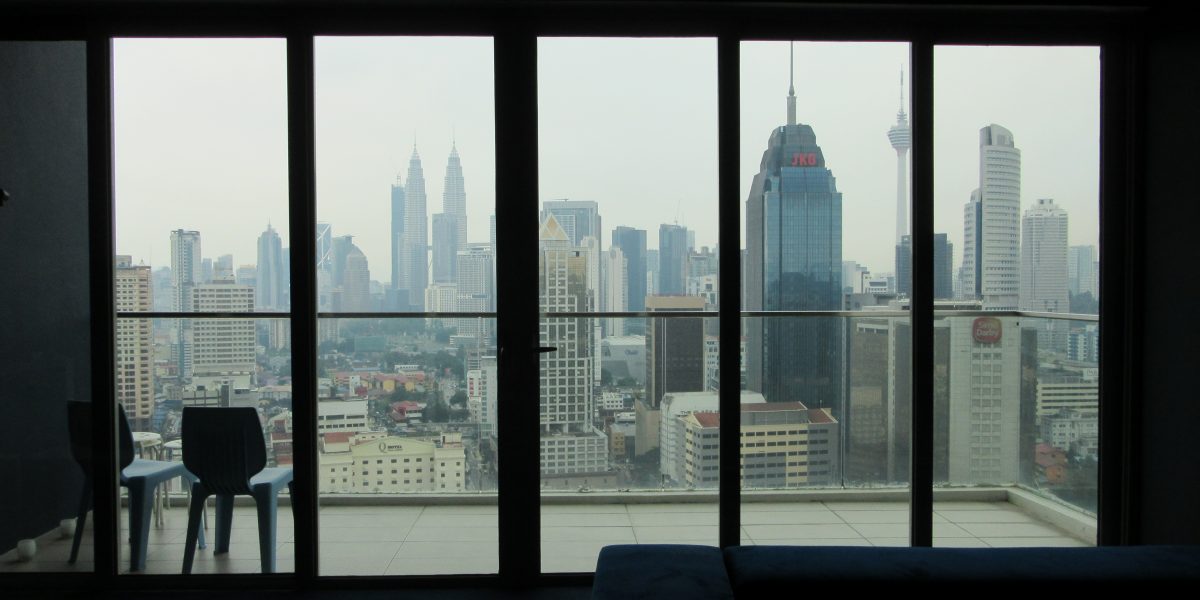 It is more expensive than I used to pay for my Indonesian accommodation, but it is worth every penny. It is small, only 8 beds, but in many aspects it is like a hotel: the bed is super comfy (Alvin confessed to pay 4.000 USD for each). We arrived around the same time with Alejandro, a Bolivian guy, and Nicole, a German girl. Russell stayed here already one night, he was there for us to feel at home. We all planned to leave on the same day, so somehow naturally we were moving together as a team. The Tuxedo squad.

The girls were starving, and as you all know, I’m really not nice when I’m hungry, so we left to have dinner. We got off the Uber on a street full of cheap restaurants and street food and quickly picked one – maybe not the best one. Later as we walked on the street, Alejandro got crazy. 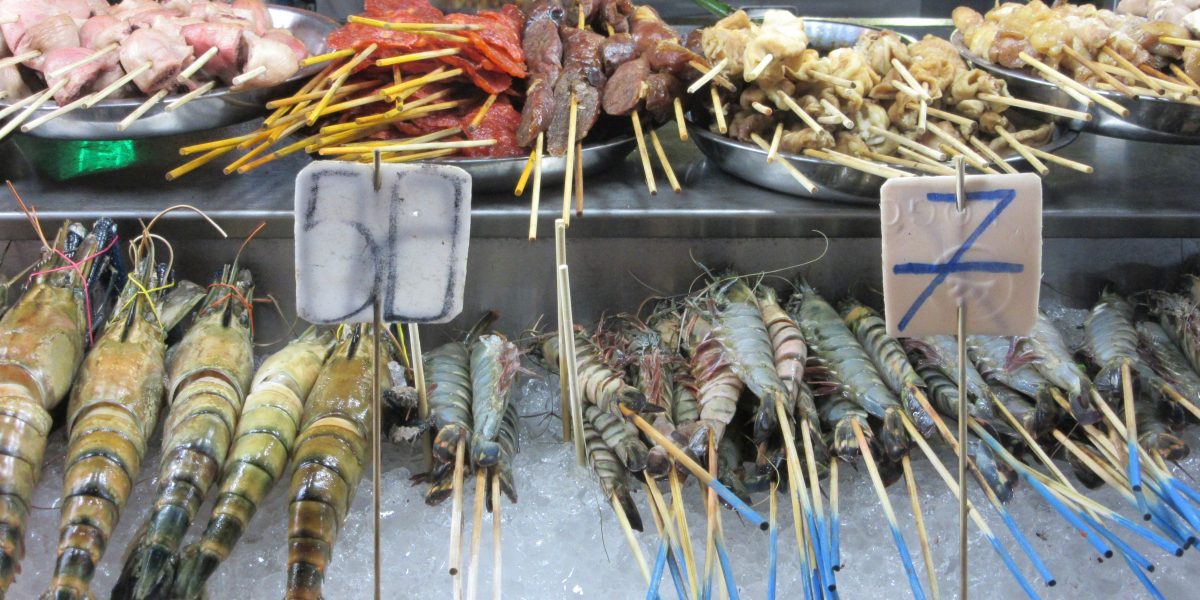 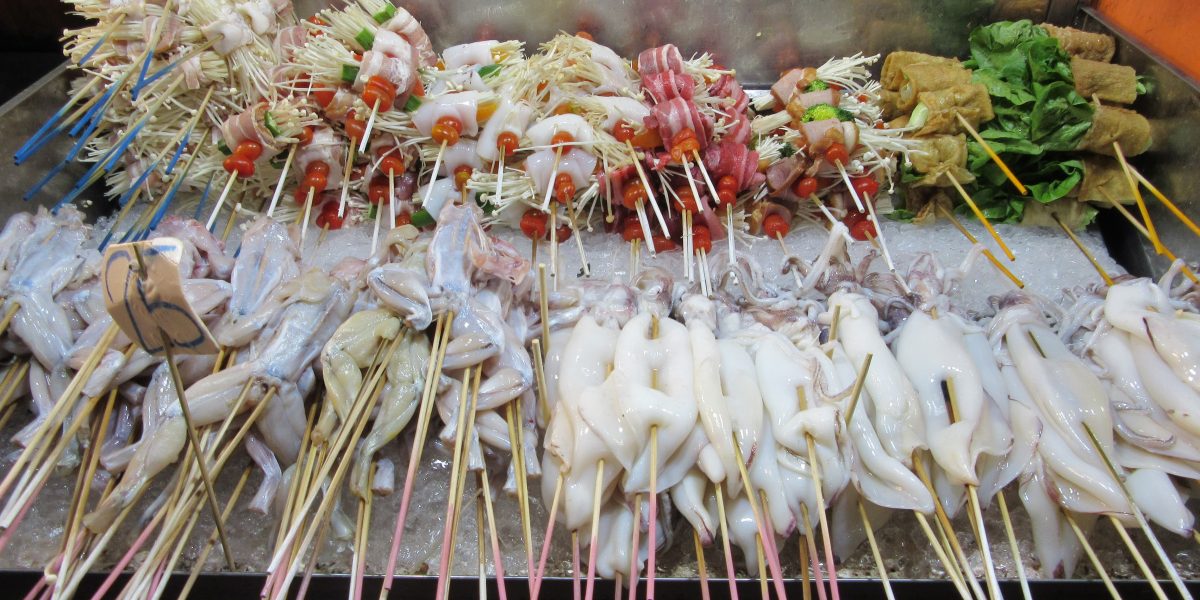 He wanted to try everything: skewered and grilled meat, fish and and a shrimp-like monster (was not open for the frog), coconut, sundried fruits and whatnot. Next day he had its effect…

We walked to Bukit Bintang, the district full of bars, where in most of the places the some of the drinks are for free for girls. The idea is, that you walk to the bar, you spend  couple of minutes there waiting to be served before you go back to your table/friends, and hopefully you attract men, so they choose the place you are in. Well, I’m not sure I was a customer magnet in my jeans shorts not washed for about a month and my t-shirt full of holes, but I got my free coctail.

In the name of equality we went to a seven-eleven (local non-stop supermarket), bought some beer that we were drinking on the side of the infinity pool enjoying the view. 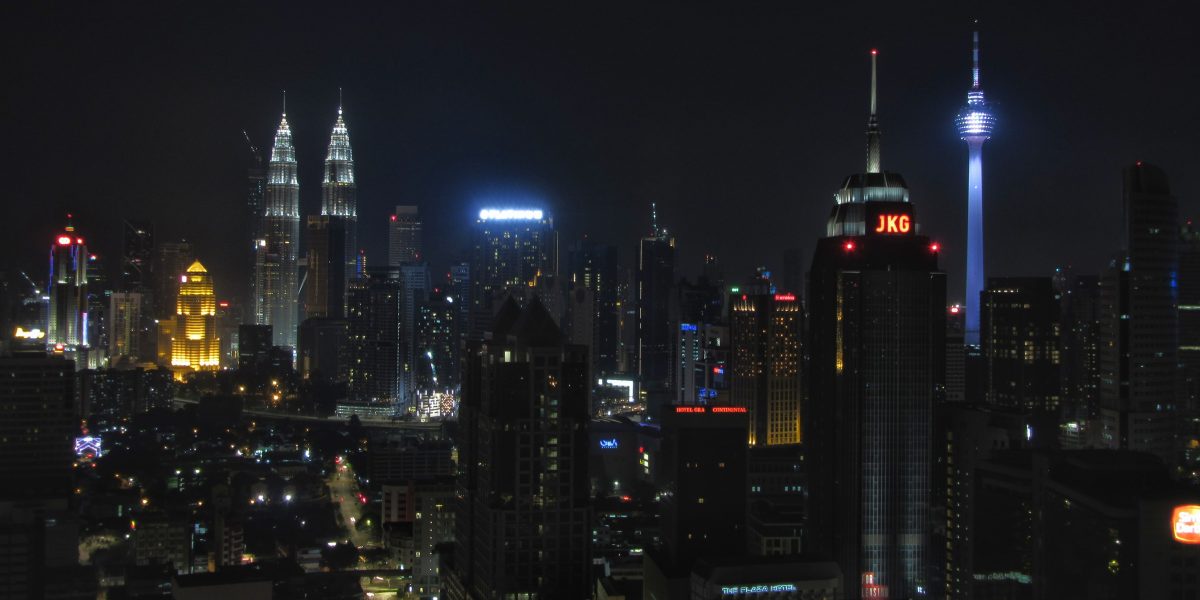 When the lights were off (at midnight they switch off the lights of the main towers), we were heading to the rooms to test those beds.

We started the next early, as we planned to welcome the new day from the pool, hoping to have a beautiful sunrise. I did not close the curtains in our dorm to wake up for the light and the great view. 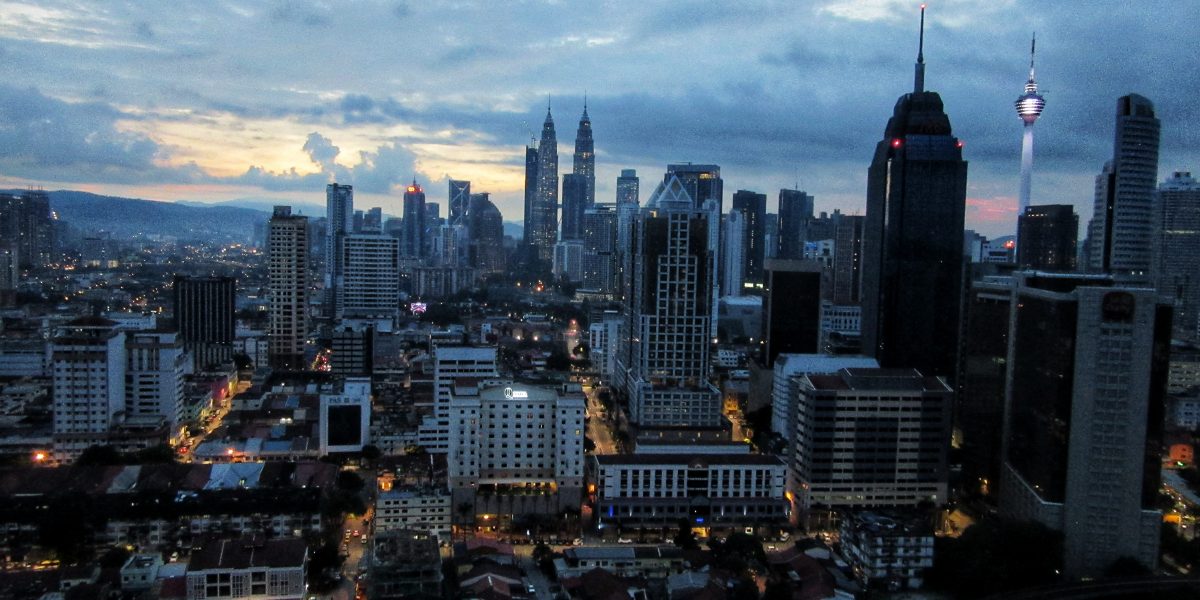 When the pool opened, it was only two people together with us on roof, so we had plenty of space and time to shoot the best photos and selfies, until the lazy ones arrived about 30 minutes later. 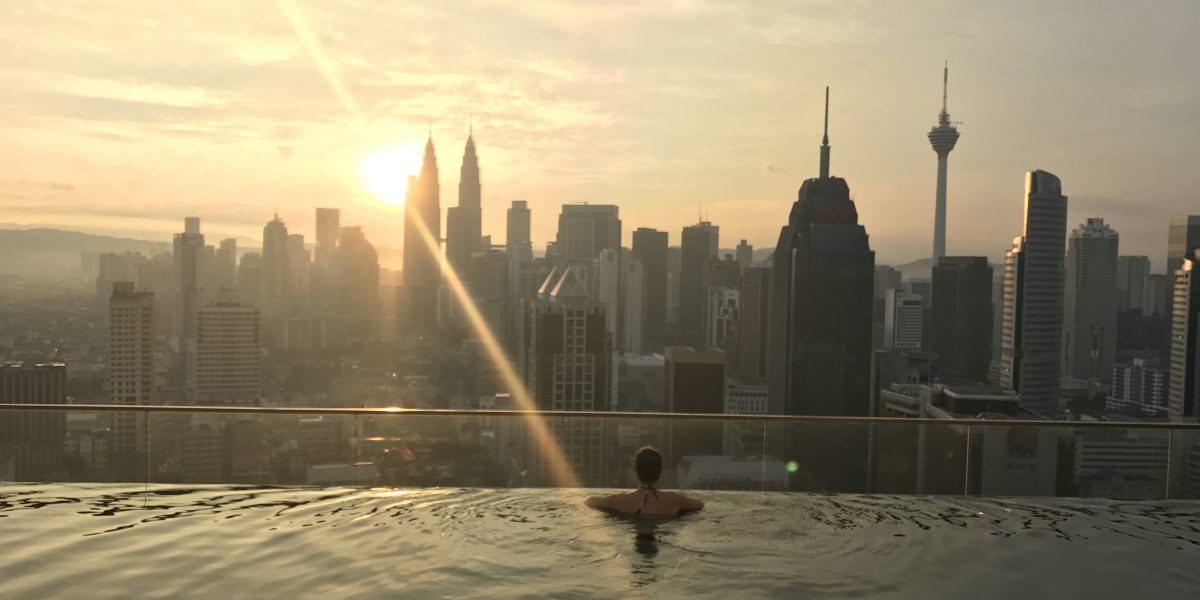 We already were cold that time – the pool is not that relaxing without the warmth of the sun – so we decided to get breakfast. We checked the local breakfast street from the balcony, but of course we couldn’t find it walking. Anyway, we ended up at a local market eating a huge chicken martabak (grilled pancake filled with a mix of chicken, vegetables and onion). 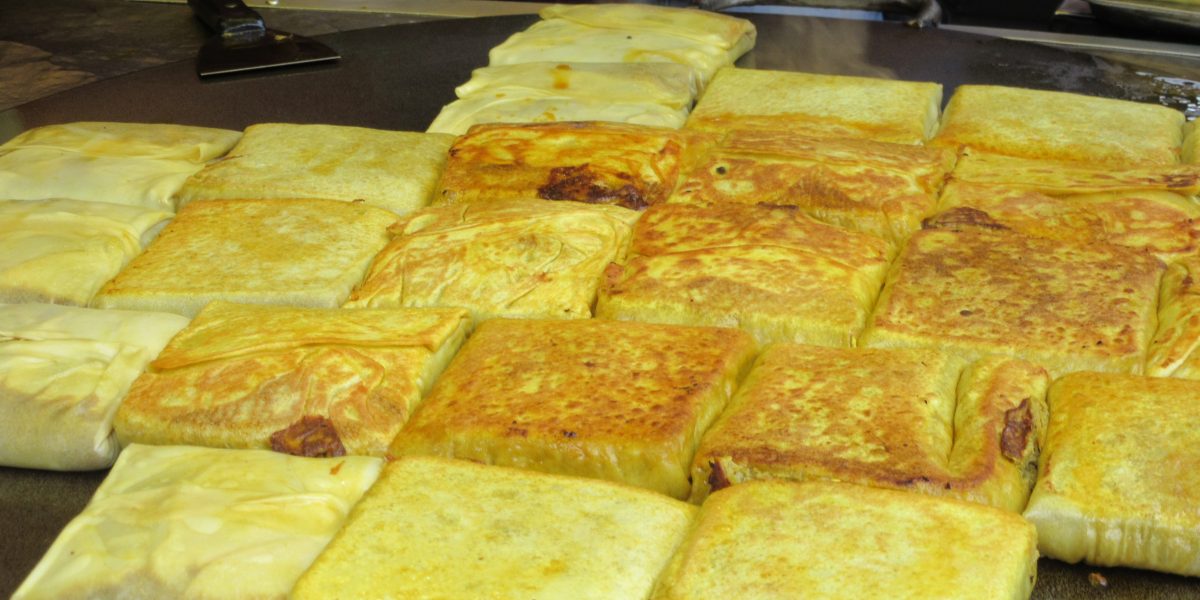 Given the fact, that we were the four of us, Uber got even cheaper per person (especially, that at the end Russell didn’t share the costs, he covered everything by himself as  gift to us – thank you again!!), we used Uber cars all day. It was really quick to Batu Caves, that is a huge cave system at the outskirts the city, having a hindu temple built in one of the largest cave at the end of the 19th century. They built wooden stairs around 1920 to reach the Temple Cave, while today there are 272 concrete stairs to climb. If you are nice, you can carry bricks with you to support the renovation of the temple or the further ongoing constructions. I figured that the selfies with bricks are only fun till around the middle of the stairs, where people leave them to form obstacles. From there the preferred selfie partners are the aggressive, food thief monkeys.

The caves are also an important rock climbing center, with more than 160 climbing routes, but this time I had no chance to check them.

We visited the KL ecopark, where we sent the pretty, blond Nicole as our embassador the sneak us in through a closed gate, and climbed some stairs to walk in the jungle in the middle of KL. We timed our lunch really well. It was heavily raining while we were enjoying our food under the tarp of a street kitchen. Then we walked through a restaurant via the backdoors to head towards Chinatown. We visited a small temple and also checked out Petaling street, the main chinese flea market before we could not manage the heat and humidity any more. We got back to our hostel for a nap. While in the evening Alejandro and Nicole enjoyed the view from the Petronas Towers, we found a nice café and also tried the impossible: shooting a good photo of the lit up towers without buying and additional photo gear. 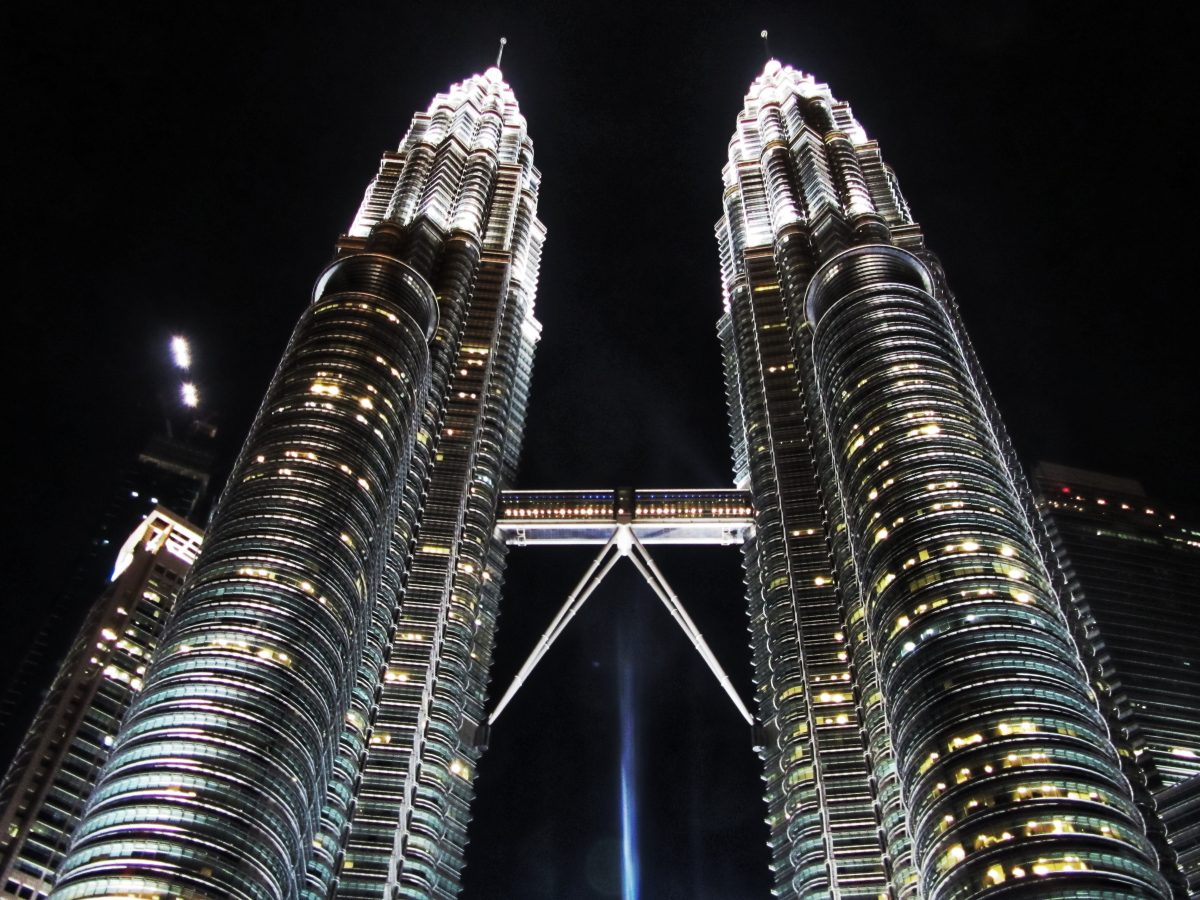 I’m realy grateful for Alvin for the late night program, when we visited a local night market, and he helped us with choosing food. Thanks to this I tried a variety of dishes: the local variant of fried noodles a chicken satay, the skewered chicken spine that I could not eat, rambutan and dragon eye fruit, crispy pancake filled with peanut sauce, soft pancake filled with vanilla, coconut drink, coconut rice with hot sauce – all this for about 2,5 USD. These are the local prices. 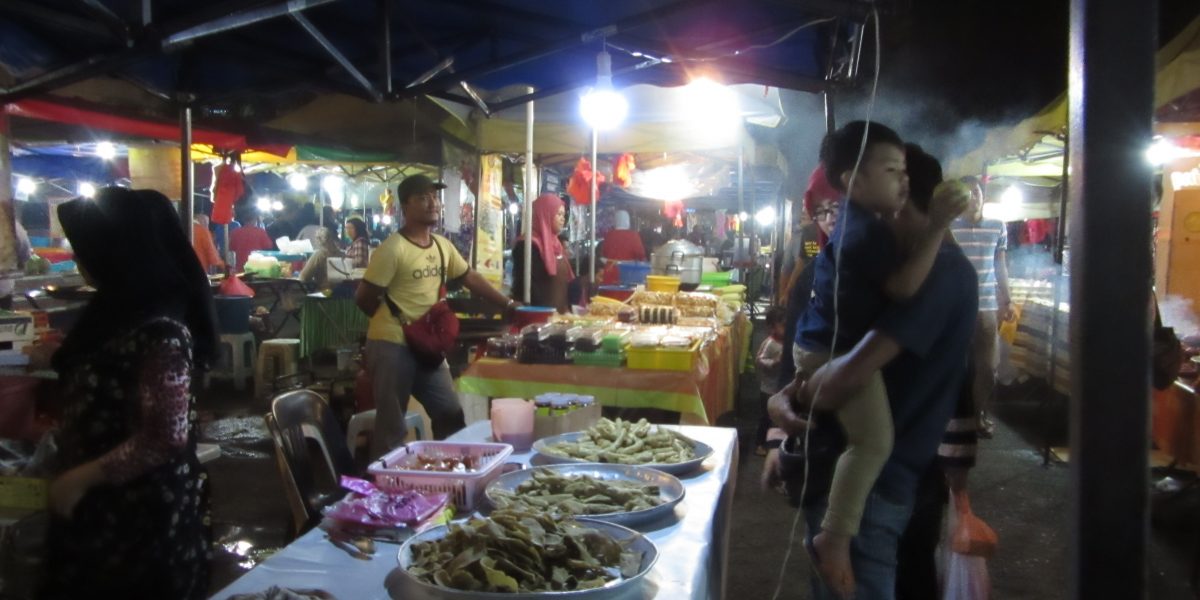 From here we left for another market to have a real dinner, but we were so full… so the team, with the addition of two Mexicans we met in Petronas Towers, ordered only 3 plates of noodles, that we ate the 7 of us. It was crazy good.

The two Mexicans joined us back to the hostel. They wanted to check it out, as they liked our picture so much. They checked in for the next day, moving from their current hostel. This is live marketing! We had a great discussion on the balcony until the lights went off. The group got more international, as a South Korean and two Colombian travelers joined. I love these nights. The many stories we share. Amazing and crazy stories of people, many times with similar backgrounds. Love stories, impossible relationships, years long travels, passion, risky situations – all stories better than you could invent by yourself. I have my all time favorite from a latin american guy, with an average family background, and with a successful bar that he runs himself. He loves to drift, so he put Japan on his travel list. He spent two weeks there driving all days, learnt to drift from the professionals. To do so without limits, he bought a drift car for many american dollars, and spent the same amount on tires he burnt during the two week’s fun. So now he has a professional drift car stored in a parking in Japan, as it is illegal to import it to his country. No plans yet what to do with it in the future. So, do we really wonder why our parents tell, that we do stupid sh.t? Have no doubts, we all have our own “Japanese drift car”…