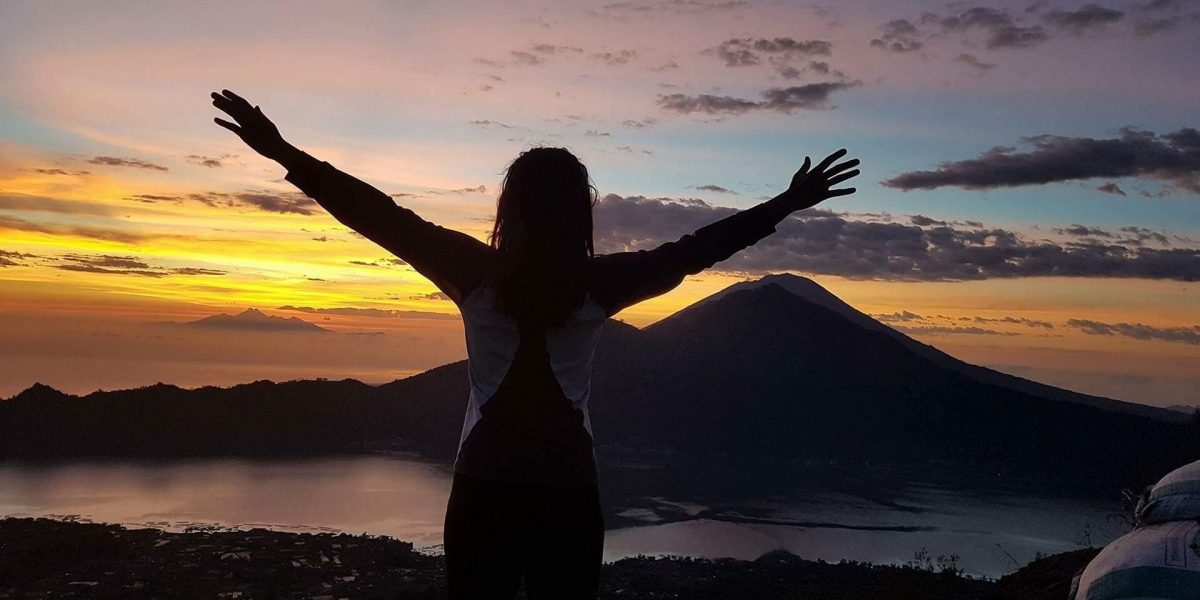 I’m sitting in the lobby of our guesthouse in Lovina, and I hear as a british and two australian discuss cricket (at least this is what I caught in the beginning). This is when I lose focus and I start wandering about the adventures of the last two days.

The day before yesterday I left Ubud with Mina and we were heading to the area of Mt. Batur. Our driver did not speak much English, but he was really helpful. I didn’t read much about the route, so I was not aware, that we have to pay 30.000 IDR extra, just to enter the Batur area. We somehow wanted to avoid this. So before the checkpoint he stopped at a construction site, asked us to cross the area and he will wait us on the other side, already within the Batur area. I had all my valuables with me in a small bag, so I did not sense any danger, but Mina worried a bit, that the driver disappears with our backpacks. He waited us with a great smile, almost glad how nicely he solved this to keep us happy. We arrived to the little village, where our next stop was, we were driving on narrow dirt roads following the signs of our guesthouse in the forest. We were pretty surprised to see where we will spend the afternoon and the night. It was the most amazing place I stayed in Bali so far. 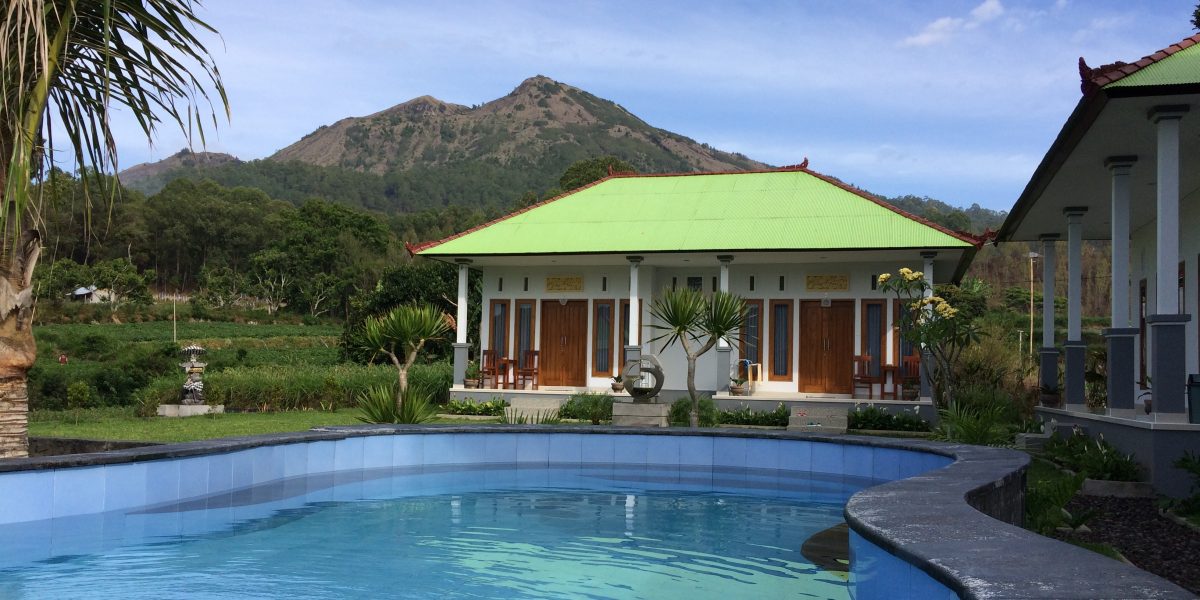 When we closed the door behind us in the room, we started to jump and scream and laugh. We spend the afternoon with making plans, relaxing in the pool filled with volcanic hot water and enjoyed the view of the volcano.

The owner, Made, created a great place. He was a taxi driver for years, but after 2000, when Mt. Agung and Mt. Batur had some volcanic activity, tourists avoided the area, so he started to drive trucks. He did it for 15 years, until 2015. During this time he was helping out in the hostel run by his father in law and he figured it would be a good business to open his own guesthouse. He says he was a driver of an american hotel chain owner and he taught him how to create this beautiful place, that was opened 4 months ago. I just hope he will be able to keep up the good service level and the high standards of the place.

In the evening we visited the temple nearby, in the forest, where they had the last day of celebration of a local festival. At the end we turned out to be a spectacle for the locals, as usually the tourists just come here, run up to the summit and travel away, and don’t spend time with visiting the community. The kids were shyly turning away, the women were giggling and the men were simply staring at us as we walked through the temple in our “scarves turned into sarongs”.

We wake up at 3:15 am, that makes no sense, especially that the chanting in the temple went on till midnight. But our guide is a little overzealous. We leave a but before four. The hike to the summit takes 2 hours max, we reach the top in 1,5 hours in a very comfortable tempo. The view is simply fantastic. The guides are worried as there’s some cloud on the the sky, but I think the view is even prettier with them. 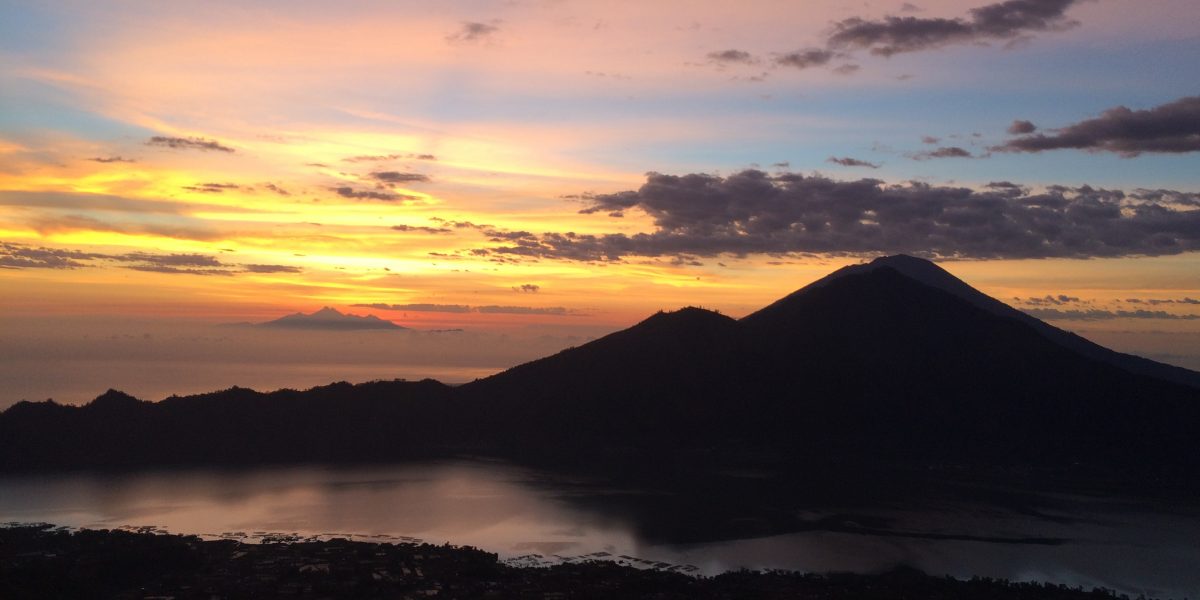 We can see the Agung Volcano – some steam comes out of its crater, but that is all – and Mount Rinjani in the distance as well. Beautiful sunrise, highly recommended to everyone, no previous trekking experience is needed. 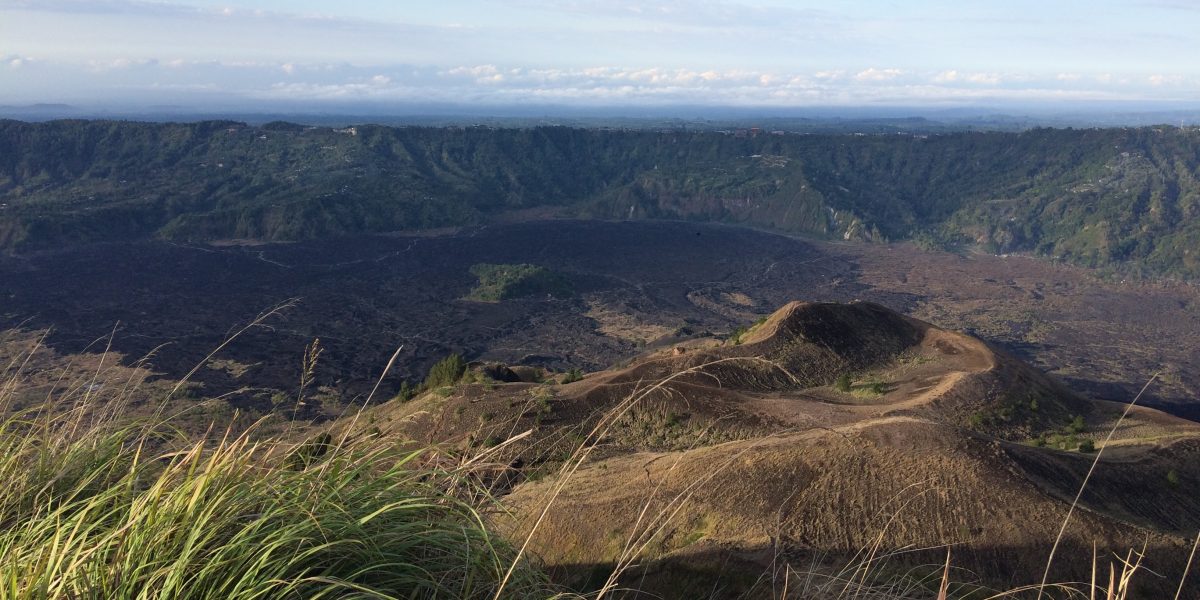 Our guide, Aju, is super cute. She is a 24 old mother with two kids, 2 and 4. She is as crazy as a small kid. She works as a guide for 2 years now, and in high season she goes to the summit every day, in this time of the year only 2-3 times a week. The guides share the customers among themselves, so that everybody has work to do. But day don’t work for fee paid by the tourists, they earn around 150 USD per month. If she takes tourists during the day as well, she can earn 40 USD more. To have enough money to raise the kids, help her mother in law and her 2 sister in law who still attend school, she does some farm work as well. She meets her husband only in the mornings, but she says it is more than enough, as when they both take day off, they always argue. The night spent together and the mornings are just fine. She knows almost everyone in the village and has fun with the other guides. There are about 500 guides on Mt. Batur. She says it is needed, as in high season around 1000 tourists walk up to the summit every day.

But why a guide is needed at all, for a lot of money? Long story short: the local guide maffia makes you hire one, and if you don’t, they make your stay on the mountain a hell, so most of the tourists do not fight, they just hire one. They don’t risk their safety and a good experience.

In the beginning they just reason kindly:

When this doesn’t work, they start the power games not showing you where the path starts, some well-set guys come to convince you. During the trek in the early morning there are checkpoints, where the guides have to identify themselves, and sometimes they just check the tourists, who seem to be unaccompanied by a local. The ones not having a guide, are stopped. They say it is easier to trick this system in daytime, saying that you just have a walk in the forest, but it is just hard to believe this at 4 am in the morning. So, the system works, even if it is totally unnecessary, everybody hires a guide.

Speaking of mafia, let’s talk about the transportation on Bali, that is without doubts ruled by the taxi mafia. Public transportation is really limited: there’s some bemo line and bus line used by the locals, but it doesn’t serve the whole island. There are shuttle buses, but those don’t stop at smaller villages, so it is not helping in visiting local sights. So there are only the taxis left, quoting incredibly high prices. Every hostel, hotel and homestay has its reliable driver, sometimes even for a higher price than the ones on the street, and don’t let other cars stopping on the streets. They have even their security personnel as well, protecting their business. There’s Uber and Grab on the island, and their price is less than half of the taxi prices. But I met more people who never got the booked Uber car, than who actually happened to use their service. The reason is simple: there are some security guys on the streets, and they simply send away the cars, that are not part of the taxi community, they don’t let them stop. The drivers and their families feel insecure, though they simple try to sell a service at a reasonable price.

So we had no choice, just the taxi to leave Mt. Batur, for a nice sum. Originally we planned to have Bedugul and its area as our next destination, but Mina’s finances were still not settled totally and we did not find an attractive place to stay either, so we decided to go to Lovina on the north shore, where we hoped to find the solution. We’ll go on separate ways from here, but I hope I will be able to manage to visit the area of Lake Bratan and the “temple on the lake”. And if I’m lucky with the public transportation, I’m heading to Java.

Tags: asia, bali, travel
Returning to Bali
On the road, almost like the locals