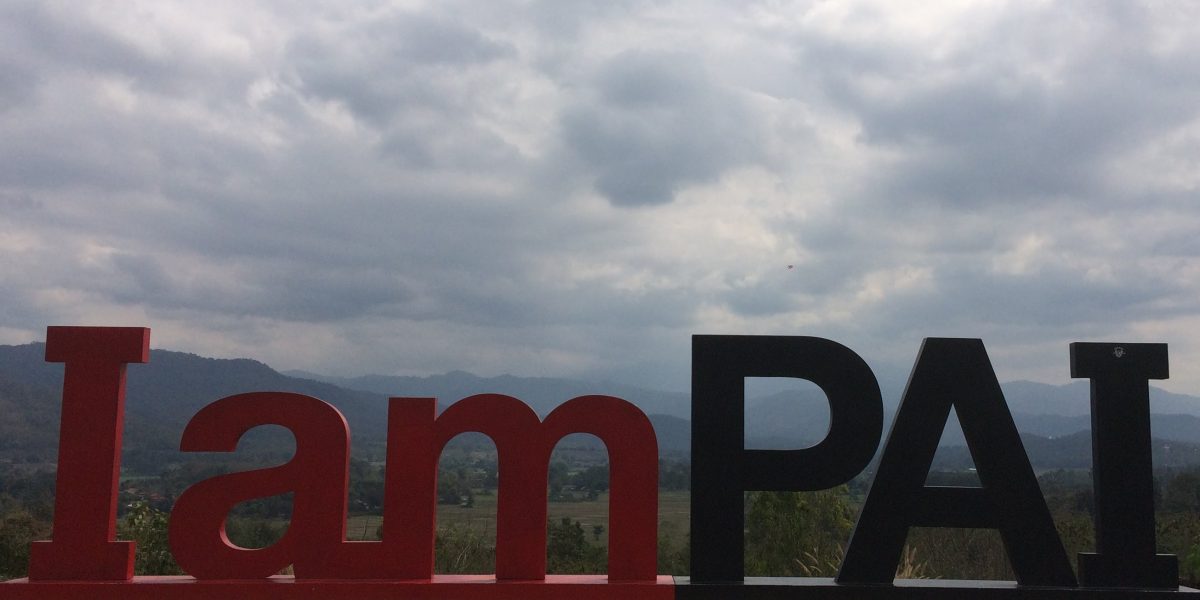 So many people told me on Koh Phangan not to miss Pai if I decide to travel to the North. I red a bit about the place, but I was not really tempted to get there before. But at the end I could not resist the many fans and the attraction of the mainstream, so from Chiang Mai I headed to Pai. Well, having some of my island buddies there was also a plus.

Usually I travel with local transportation, but this time I joined Tanit in a minivan. I got to know Tanit from my yoga school. She is an American girl born in Ibiza, raised in New Mexico, moved from Los Angeles to London, relaunching her TV show production carrier in Europe. Her colorful family background and diverse experience in life created an exciting personality. We could connect quickly and even though we always stayed in separate places for the night as we have a very different travel budget, it did not stop us having a lot of fun together.

I was not truly happy about the minivan ride, as many people reported crazy drivers on the many hairpin curves on the way, that results of even those people getting motion sick, who are usually fine during other mountain rides. Yey… with normal bus it takes 4, with the minivan 3 hours to get to Pai. Our driver was pretty modest with 3,5 hours, and tempted to kill us no more than three times. Not too bad.

In Pai we immediately targeted the Night Market, and I have to admit, that the culinary pleasures started in Chiang Mai just continued. Amazing pad thai, burmese salad (one of my favourites), little bites, vegan chocolate balls, pad see ew – whatever you want. Maybe I did not even spend 100 baht (around 3,5 USD) and I was soooo full.

We planned a rich program for the first day in town, so we needed to rent a bike. Mine went quickly, rented a Honda click 125 cm3 automatic bike from my hostel. It was super cheap and smart, so at the red light the engine went to sleep and I did not need to restart it, just to give some gas. The difference between this one and the one I had in Koh Phangan was just huge. I loved this one. But be careful with riding a bike in Thailand. Especially in Pai, where every second person was patched up. I even saw an accident, when a guy simply fall back to the road in a hairpin curve. It didn’t look too good. One of my roommates thought it is a good idea to drive a scooter in Chiang Mai for the first time in her life, and when sliding, the hot parts of the bike burnt her skin, and as she did not visit a doctor, it also got infected.

But let’s get back to Pai. We visited the cute Hyuan Lai viewpoint to see the beautiful vista of the valley, then the Chinese village (Ban Santichon) below, that is so weird, that it is almost beautiful.

Our next stop was the Mo Paeng waterfall, where we could’ve slide on the rocks and swim in the pools, but it was so cold, that in agreement with the only two people being there besides us we skipped this part.

We payed a visit to the White Buddha to marvel the view from the other side of the valley as well, then checked the place called ‘another White Buddha’ on the map. The next attraction to see was the Memorial Bridge, that has a great atmosphere. 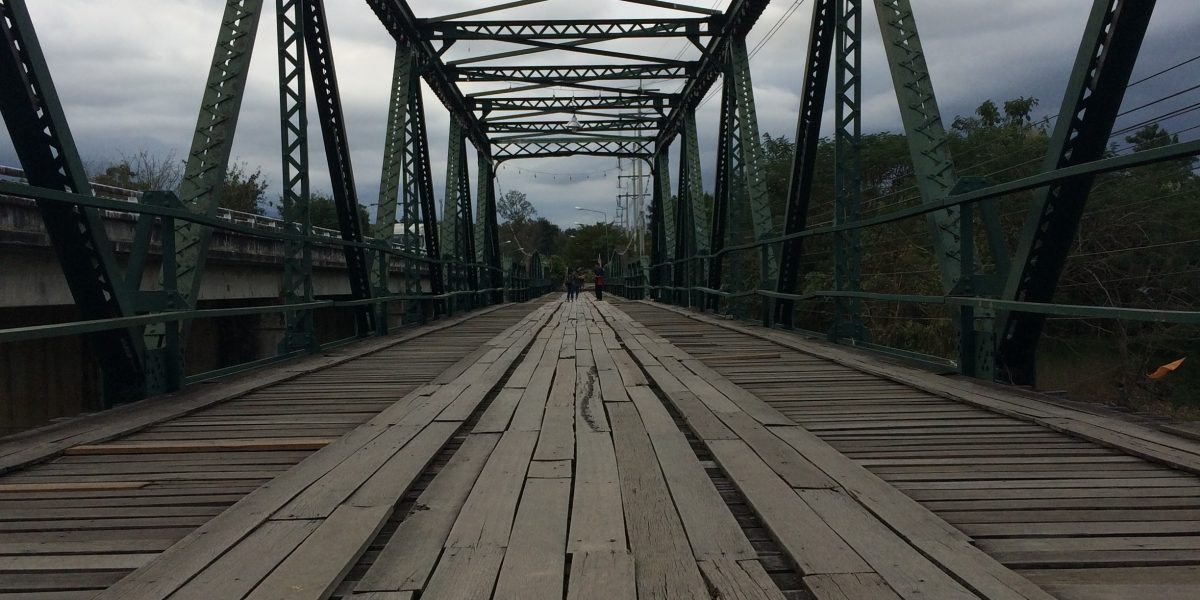 It might sound bizarre, but it is true. It is a memento of the cruelty of the Japanese forces preparing for the invasion of Burma, who forced the locals to build the railway and bridges to support this military move. Many locals lost their life during the construction works. This bridge is only a replica, as the original was destroyed by the Japanese forces when leaving the area. It feels good to visit it, as it shows the pain, but still it is a rather gentle reminder of our history and of the cruelty not to be committed again.

As a closure of the excursion we visited the Pai Canyon. Though I’ve red some negative reviews, I am actually happy that we went there. It was super cloudy so we didn’t see the sunset, but still it is a great place to visit. 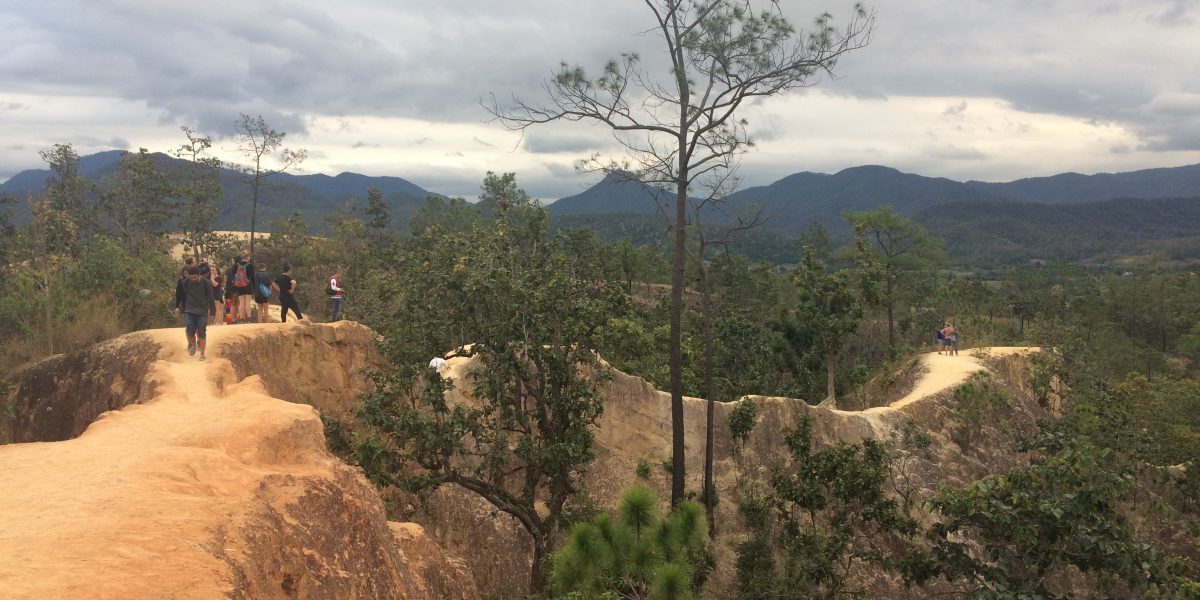 I recommend to wear other than flop flops. Wearing good shoes we have more options, you can walk around in a pretty large area, sometimes combined with a bit of climbing. If you have a fear of heights, you might want to go just to the first viewpoint to enjoy the panorama.

It was really cold in the evening and during the night. This was the first time on the trip when I was cold while not being in the mountains. So after the semi-compulsory night market dinner we went to the Paradise bar to enjoy the fire performance while sitting close to the bonfire.

My original idea was to go to Mae Hong Son on a scooter the next day and also sleeping there, but seeing the clouds and the weather in general I called off this plan. 100 km drive in the cold and rain is not that much fun. So after replanning I decided to cruise till Soppong, that is only 45 km away from Pai, just to enjoy the scenery and the many curves of the mountainous road. I got till the first bigger viewpoint about 25 km far, where I was riding in the clouds already. 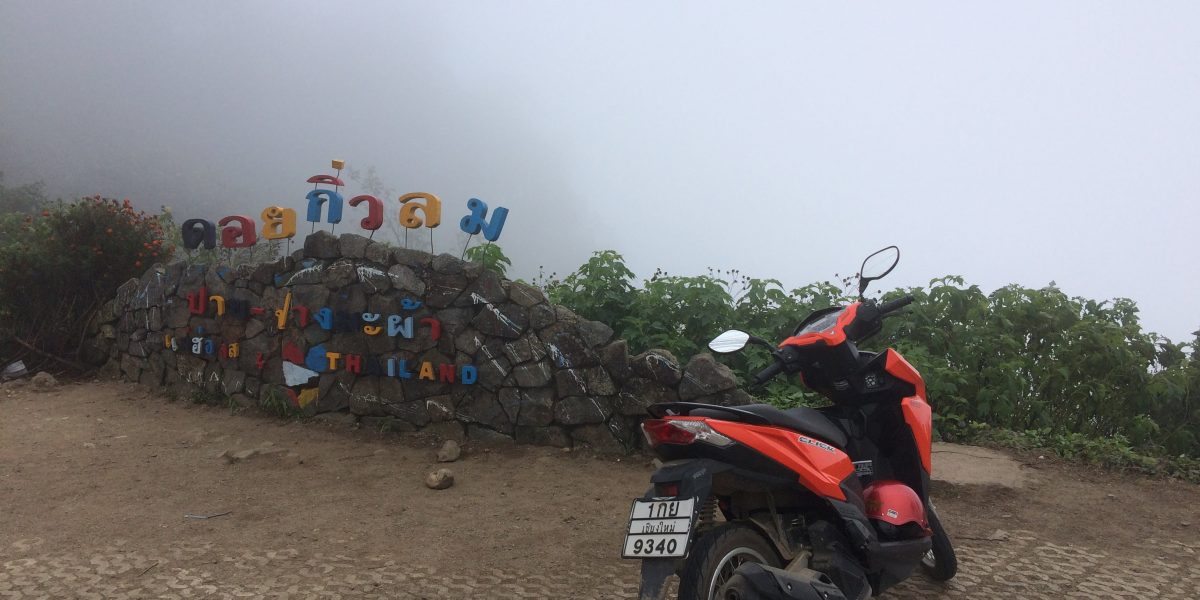 I was wearing all my warm clothes, and even though my body was ok, my hands were freezing without gloves. Riding the bike with half-frozen hands in the mist/clouds is not joyous, plus I could not really enjoy the view either, so I decided to turn back. In the meanwhile Tanit enjoyed the hot springs, or at least tried, together with all the tourists of Pai, except me.

Next day the weather got better, so I decided to visit the Pam Bok waterfall, but I only got until the Pai Land Split, that is the most loveable attraction of Pai. In 2008 there was an earthquake around Pai, and destroyed the farmland of a local family. There is a huge, at some places 20 meter deep crack in the soil. It was clear, that they cannot do farming there anymore, so the owner decided to use this as an opportunity and turned the place into a local attraction. He created a little educational path tagging the local fruits and trees, put up a chilling area with hammocks and offers fresh cold juice for everyone stopping there. It is free, but everyone is welcome to leave donations. If you decide to spend some time in the hammocks, he brings some fresh organic fruits, banana chips and jam. I saw a lot of people chilling there for an hour or two, it feels good to stay, talk to strangers and eat delicious local bites. This is where I met Samir, Benedict and Nimrod (an american palestinian, a german and an israeli jew), with whom I had a nice long conversation, and later visited the waterfall that I planned to visit at the first place.

Pai is known as the backpacker heaven, but I think it lost its original charm, it is totally westernized, it is not a thai village anymore. I admit, it is really comfortable to have croissants, bagel with cream cheese, egg benedict or avocado sandwich for breakfast in every café, everyone wears elephant pants, and smokes weed and drinks mushroom shake in the evening. Everyone is super chilled, don’t care about time and is very hippie. For me this is not very attractive, even if I also like to have a good quality coffee in the morning, but its surrounding, the view of the mountains, the roads with the hairpin curves, the free cruising (I put more than 150 km in the bike) worth a visit. It’s a pity that I didn’t get to visit Mae Hong Son, but it is just another reason to come back. Now I feel it is time to move on.