Travelling thru – crossing the Cambodia-Thailand border 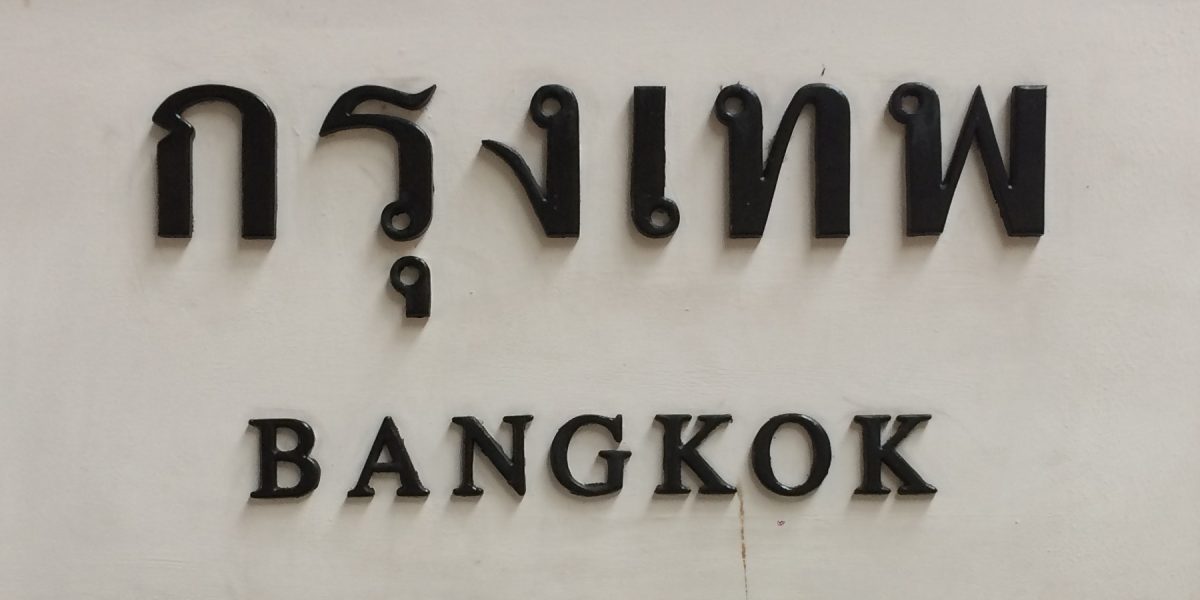 I continued my travel through Cambodia to reach Bangkok via the famous/infamous Poipet border crossing.

But why do I travel to Bangkok?

This happens when I don’t plan, things are just happening. On the last days spent in Seam Reap I started to think about what to do next. There’s one fixed point, I have to get to Singapore. But from where?  And what to do till then? I had many different ideas. Vietnam? Ho Chi Minh City would be logical, but I don’t feel like going there, or the Mekong Delta. But Vietnam is so much more than that, I deserves a month, but I don’t have that much time. From the North to the South with a scooter. Ah, that is a next trip. Maybe the cambodian islands? Hm, rather next time.

Suddenly an idea came that I really liked: I don’t fly to Singapore, but try to get there by train/bus, most probably with a bit of adventure, some border crossing on the land, that usually shows an interesting face of the region. Travelers experience many situations that are not part of the ‘fly in, quick holiday, fly out’ pattern.

To turn this idea into reality, I travel to Bangkok, from there I take a sleeping train to the Malaysian border, from there on the North-South main trainline or on the Jungle line I get into Johor Bahru, and from there to Singapore. On the way I stop at some places in Malaysia that look interesting for my last days. So, planned or not, I am heading to Bangkok. When? Of course on the day of the Chinese New Years, when the anyway crazy city assumingly gets even more crazy.

From Battambang to Bangkok

But how do I get to Bangkok. You may think, that as Battambang, the second largest Cambodian city is not too fr from the Thai border, it will be pretty easy. Well. This particular border crossing is not a simple one – despite the fact, that many people use it every day. I checked the options and the prices, read the latest blogposts, posts on travelfish, tripadvisor and some others. All say, that there’s no direct bus, and any company stating something different is simply lieing. So, rather do it yourself, than pay for a direct Battambang-Bangkok offer. Virak Buntham is the company that is the worst among others, based on the reviews, so you’d better don’t risk your sanity with them.

Any guess? I travel with Virak Buntham, even if I didn’t plan it. But at least I will have my own opinion based on my own personal experience. Since I new the options and the prices, I didn’t choose the fake direct bus, but a bus + minivan combo, that leaves town at 7 am. (Bus till the border, and from the cambodian side a minivan.) I was prepared for not leaving on time, for waiting for everyone at the border even if it takes hours for someone to cross, we wait for even those who leave Battambang and other Cambodian towns later, we stop for a break lasting for hours, crossing the border may take one or four hours, depending on the size if the mass and the mood of the immigration officers.

But it was different. Yes, we left late, but just 20 minutes later than planned. It counts as punctual here. Wow #1. Leaving Cambodia was quick. Look into the camera, fingerprints, departure card torn out of the passport, stamp and go. The Thai side is less fun. We queue up to queue up on the first floor. A huge queue, with many people that hardly fits into the room, where we reach the ‘45 minutes’ sign 50 minutes after we reached the border, at 10:20. Half an hour later 5 immiggration officer gave up the fight with the massive work, only one hero left to face the people with rapidly losing good mood. Another half an hour went by, when two officers returned to give some speed to the process, so finally at 11:30 I entered to Thailand again with an official stamp in my passport. After of crossing the border was not too bad, except that it was really hot in the room, there was no air and I needed to pee badly after drinking one liter of water. (Not smart! rather stay thirsty…). But we didn’t need to pay a little extra to anyone, it was super logical what to do and where, so basically all we needed was patience.

We received colorful badges on the Cambodian side, so that it becomes easy to find us on the Thai side, and ee sit on the right bus. Wow #3. They hunted us down in no time after crossing the border. First we waited in the shade, then walked to the company’s headquarter to wait some more for nobody knew what. Then finally the told, that the bus will pick us up at 1 pm, we can eat-drink till then. I left the station, and though I arrived back 10 minutes before 1 pm, my travel companions were in full panic, that the bus arrived, and if I don’t get back in time, I will miss the bus, and …. But I‘ve seen some things in Thailand already. I got on the bus, but half of the people just went for a coffee or to the toilet, the driver had a cigarette, we waited for another 5 people being late, so it was about 1:30 pm when we finally left the border. With a normal bus, instead of the promised minivan (?). Bangkok was a popular destination this time, there were not only farangs, but locals as well. We had just a short break around 4 pm, and headed towards the traffic jam of Bangkok, that we reached around 6 pm. Another hour, and we reached exactly the same bus station that we were told to have as the last stop. Wow #4.

I may experienced the only good day of this company this year, but there was nothing wrong with this travel.

Tags: asia, cambodia, thailand, travel
Battambang
Speciality cafés are the IKEA for me