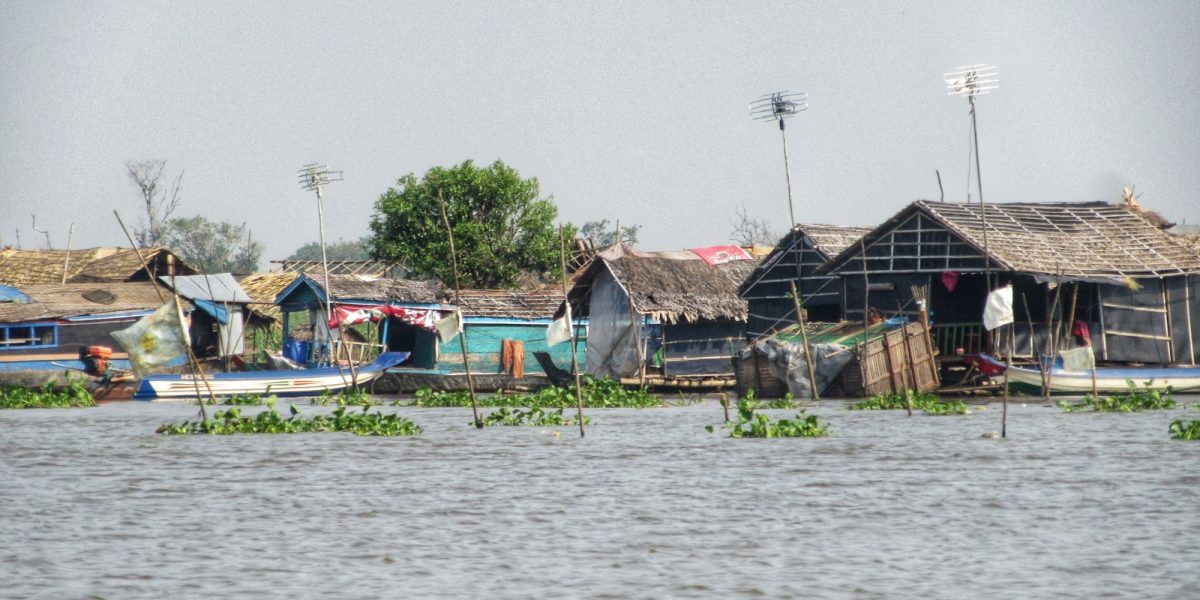 I guess most of us never heard about Battambang, the second largest city of Cambodia, southwest from Siem Reap, northwest from Phnom Penh. The way to get there was really attractive to me, as since I travelled on the Mekong, slow boat trips became my favorites. Yep, you are right, I easily get motion sick, but somehow slow boats are okay, my body doesn’t resist. You can get a boat to Battambang, until the water level allows it. The boat first crosses Tonlé Sap, the huge lake of Cambodia, then cruises upriver till Battambang. The boat passes by floating villages and huge fishing nets. 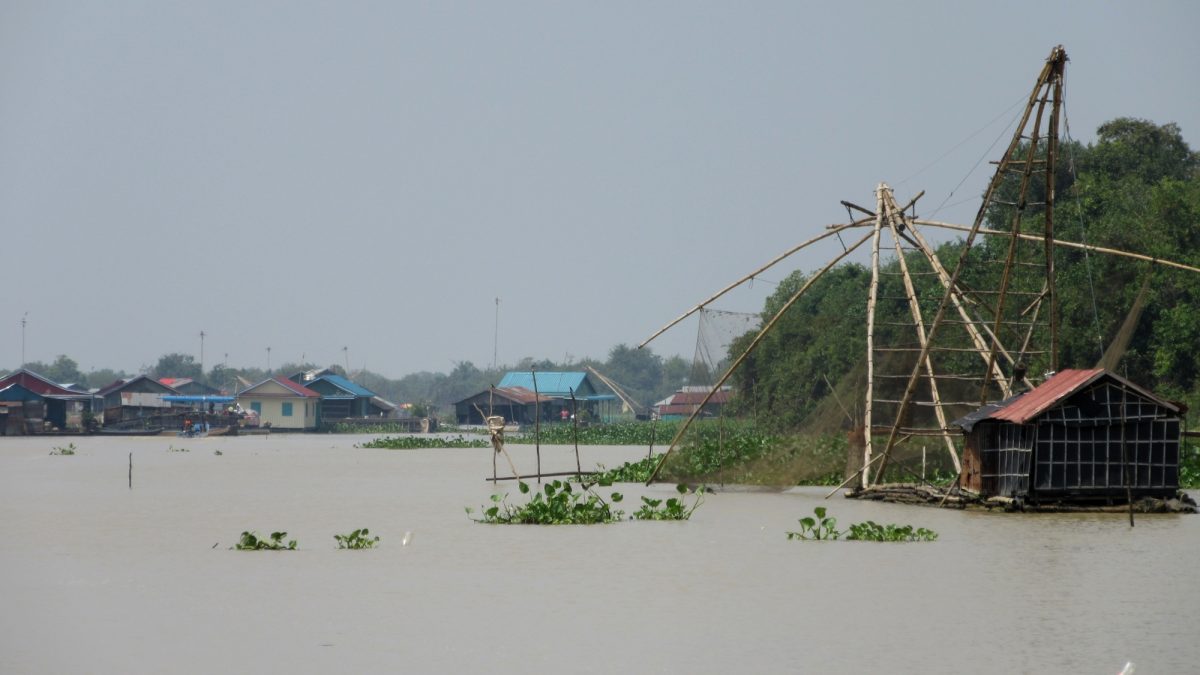 When the river gets narrower, the nets become smaller. There is a section, where the captain needs to be really skilled to get the boat through. In rainy season this is an easy and quick travel, takes about 3 hours. But in dry season the route is tricky, and they just guess the duration between 6 and 8 hours, maybe more.

Travelling by boat also good for meeting people. This is how I connected with the French Loreline and the Spanish Cézar. Loreline is on a 1 year sabbatical leave after spending years with the French cosmetics giant, L’Oreal. She ‘just’ travels three month and dedicates the rest of the time to find herself and the idea of what to do next. Communication in English with her sometimes turned into English classes, but still we had good conversation. It turned out soon, that we wouldn’t be good travel companions, as we have different priorities, different values and different budget. We started to plan the next day’s program together, including the Swiss Carmen, the German Nadia and an Austrian girl (sorry, I forgot your name!) bargaining with the only available tuk-tuk driver at 10 in the night. We tried to figure out what to see for how much, full day or half day. As you might know, I am really not good in bargaining. Plus I tend to think, that I feel when we push too much, and the energy is shifting till the conversation becomes bitter. And when we consider 4 dollars expensive for a half day long 40-50 km tuk-tuk drive, but spend 10 dollars on a 30 minute massage right after… well, this is not my style.

In order to spare some money, we squeezed 6 of us in a small tuk-tuk and visited Wat Banan, an Angkor era temple. 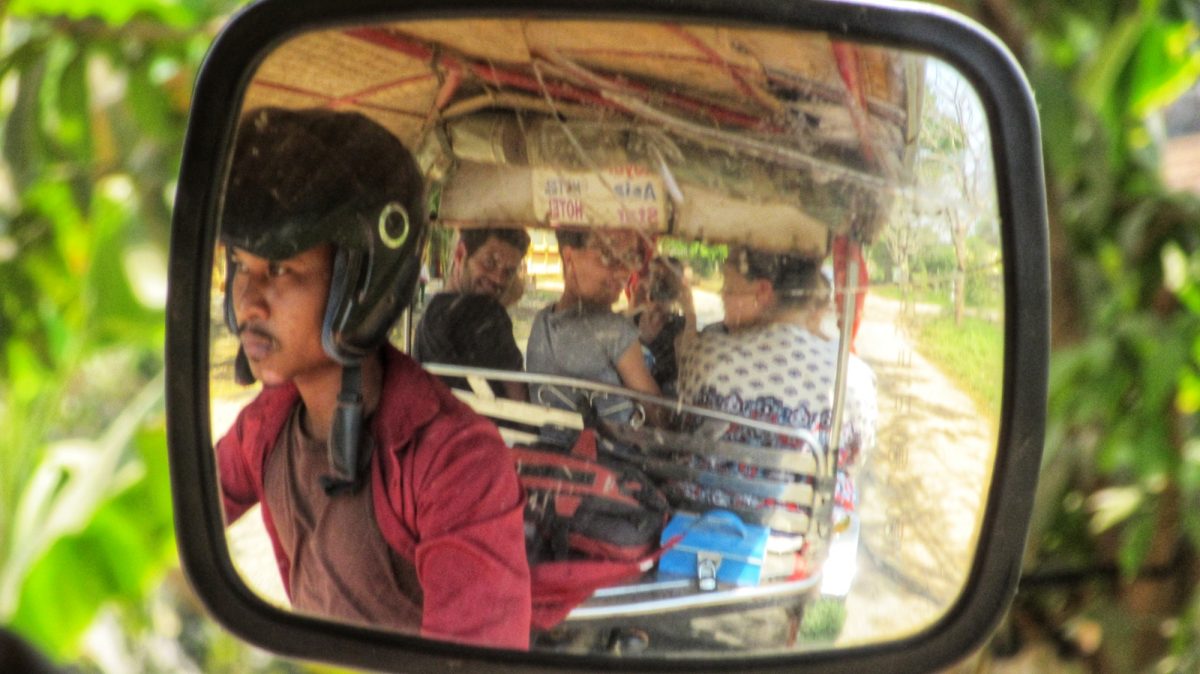 It simply could’ve been one of the temples in the Angkor complex, except that it had some frangipani trees, cacti and was located on the top of a little hill, that is non-existent around Siem Reap. It was great to see that the temple was full of young locals. 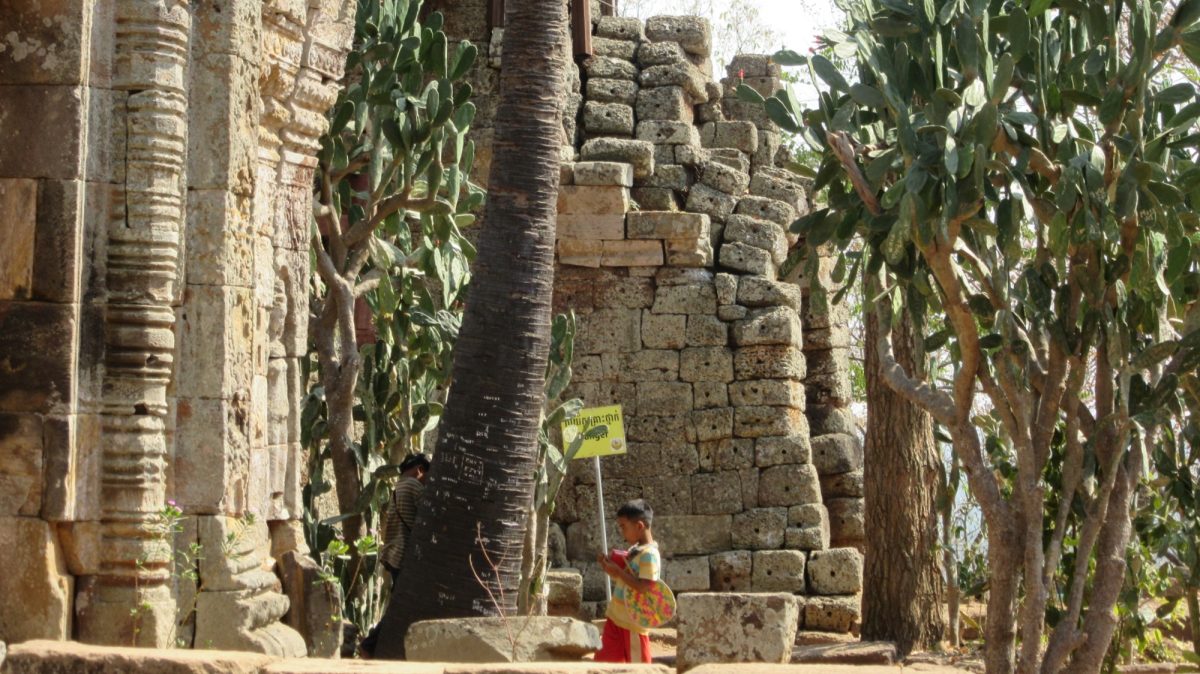 It is free for locals, and many of them decided to spend the free day of Chinese New Year here and the park around the temple.

Next we visited the Phnom Kdong Pagoda, though this is not too interesting. But it is located on a hill, that has many caves that were used as killing caves by the Pol Pot regime. They pushed people into the caves, most of them died immediately, other survived, but starved to death as there was no way out from the caves. A pile of skulls and bones are left as reminders on the horror.

The same hill has some other caves, that attract many tourists around sunset. 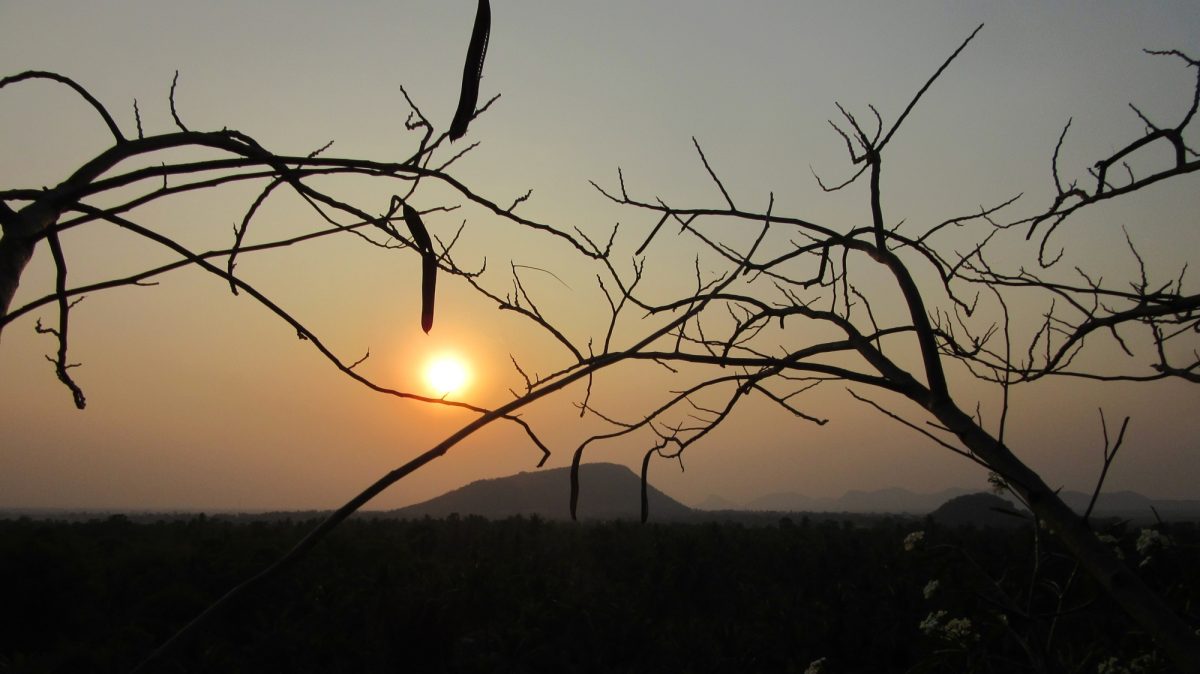 Millions of bats leave the caves for the night to hunt, and this takes about 15-20 minutes. This is simply magical. You can observe as the bats are flying around before disappearing in the surrounding jungle.

We only left when it started to be really dark and the number of bats leaving the caves became much less and the experience was less intense. It was so amazing, especially as our driver knew a hidden spot, where we shared this experience with only a few fellow travelers, instead of the hundreds of people at the well known spot. But since someone already marked the spot on maps.me, it won’t stay hidden for long.

There are many more attractions in the area, but what I was mostly interested in, were the art galleries. Battambang is actually a center of arts in Cambodia. Already before the era of the Khmer Rouge many artists started their career here, but most of them were executed or fled the country during the years of terror. But lately Battambang reinvented itself, and again there are many art initiatives around. One of the main driving forces is the Phare circus. I saw their show in Siem Reap, and as a regular visitor and fan of contemporary circus shows, I have to tell that they have a really great, good quality show on stage. It was entertaining, funny and as and extra, they showcase khmer social issues while using contemporary music.

Phare is an amazing center and gives back a lot to the local community. They teach circus arts, plus they have a huge variety of arts in their curriculum, teaching 1200 kids a day. (Per day, as many of the kids don’t come every day.) Most of the kids come from very poor families and this is the only chance they have for a better life. The education here is free and the kids also get free hot meals, in return they are expected to work hard and to be loyal. Most of them take this really seriously, train hard and some of them were even selected to the world famous Cirque du Soleil. Most of the income of the shows is returned to the training center, where they teach visual arts and music as well. They provide possibilities to the artists to have their art on display in galleries in Phnom Penh, Kampot and in Battambang.

I wanted to visit some of the galleries in Battambang, but most of them were closed due to the Chinese New Year. Actually half of the city appeared to be asleep… So I decided not to stay longer and move on, but I am glad, that I made a stop here.