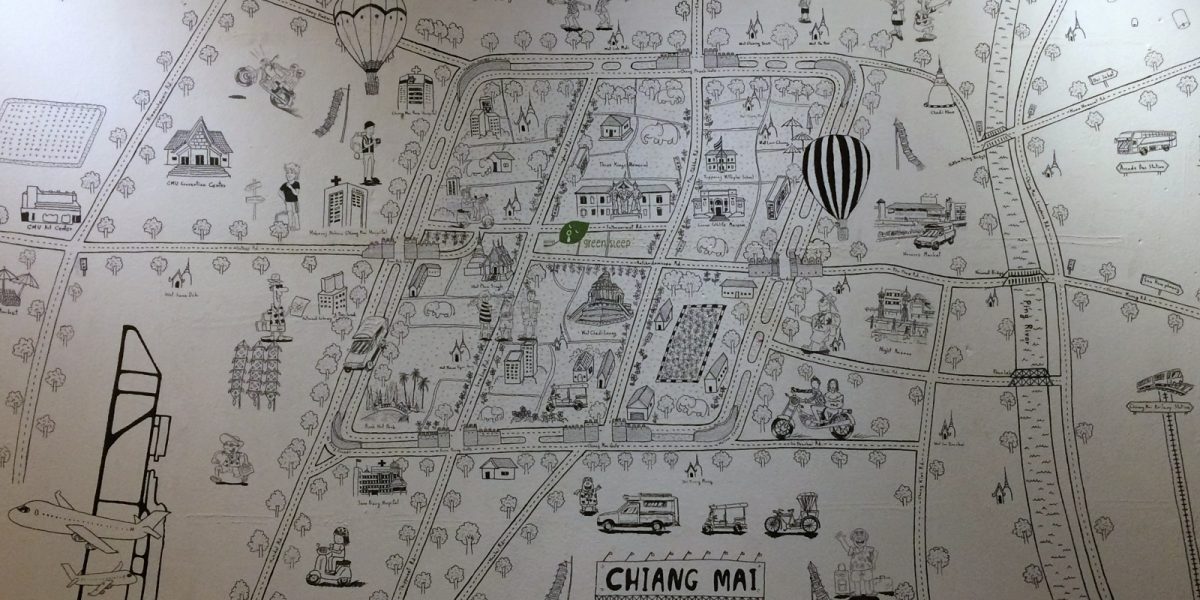 I remember writing about Bali, that there are temples or temple-like buildings at every corner. Same is true for Chiang Mai, with the exception, that here actually everything is a temple that looks like a temple. And there’s a lot of them.

My trip from Koh Phangan was smooth. The ferry was on time (almost), my hostel in Surat Thani was alright (though the mattress felt like a plank wood) and the plane left as scheduled. I was in Chiang Mai around noon having nice surprises. I heard horror stories about the cold up north, but shorts and flip flop remained to be my regular outfit here as well. The second surprise was how close the airport is to the old town and how easy and cheap is to get there. By taxi it is cca 150 THB (4 USD), but if you are not in a hurry, you can use a shared taxi for 40 THB (1 USD). The songthaew is the shared taxi of Chiang Mai, a red pickup with two benches facing each other in the back, where even 10 people can fit in. You just flag down the car, tell your destination to the driver and he decides to take you or not. The standard price is 30 baht, but to the special destinations, such as the airport or some tourist attractions, this can be 40 baht.

My arrival was so much on time, that I had a half day left for discovering the city without any plans. I just started to walk on one street and I bumped into beautiful temples. Later I figured, that I managed to visit the two most important temples in old city. The Wat Phra Singh and the Wat Chedi Luang are really special places.

The founding stone and the first chedi of Wat Phra Singh is from 1345, but new temples and details were continuously added to reach its current size. During the Burmese rule in the 17-18th century it was neglected, and was renovated only in the 20th century. The chedi guards a holy Buddha from Sri Lanka – it is the original, or not, or maybe just a head of it is a replica… you may hear many stories on that. Whatever is the case, the temple is for sure beautiful, and the elephant fans can be especially satisfied when meeting the four golden elephants glowing in the sunlight. 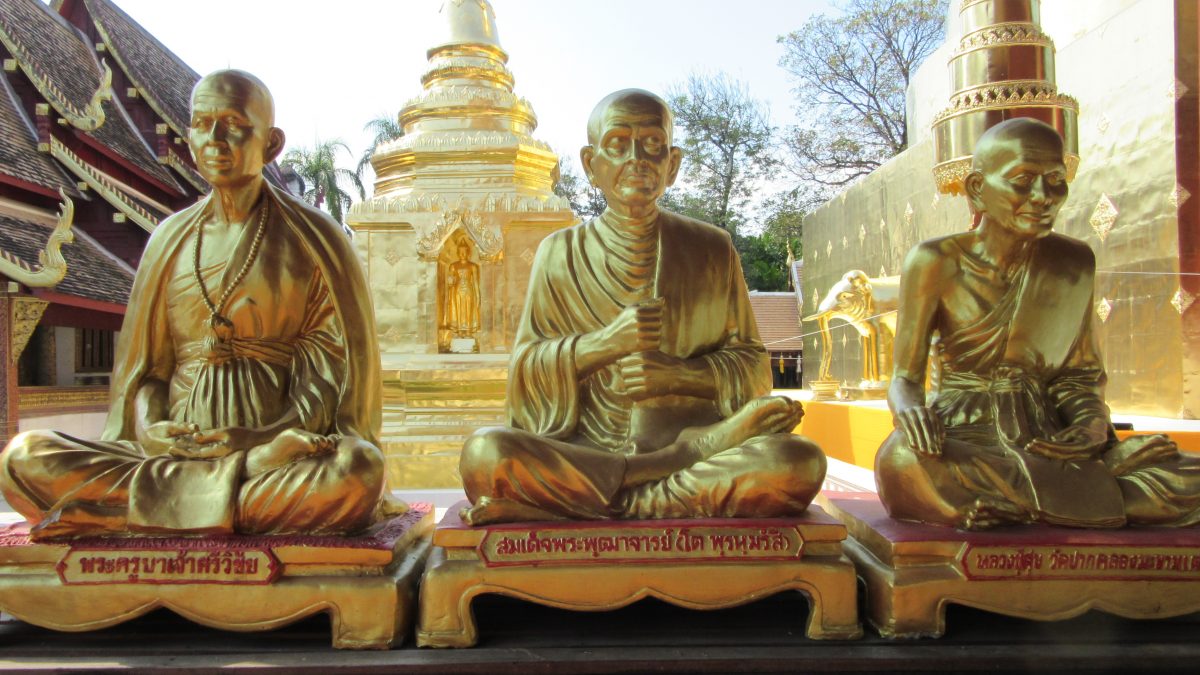 The Wat Chedi Luang is also located in the historic center of Chiang Mai, and its foundation is also dated back to the 14th century. Its unique pyramid shaped chedi was more than 80 meters high, but was damaged during an earthquake in the 16th century. This is when the Emerald Buddha was taken to Luang Prabang from here. I loved the atmosphere of the temple, walking around to enjoy the little details, discover the hidden spots, meet the almost-Botero-style Buddha, imagine how the temple complex looked like at its best years. 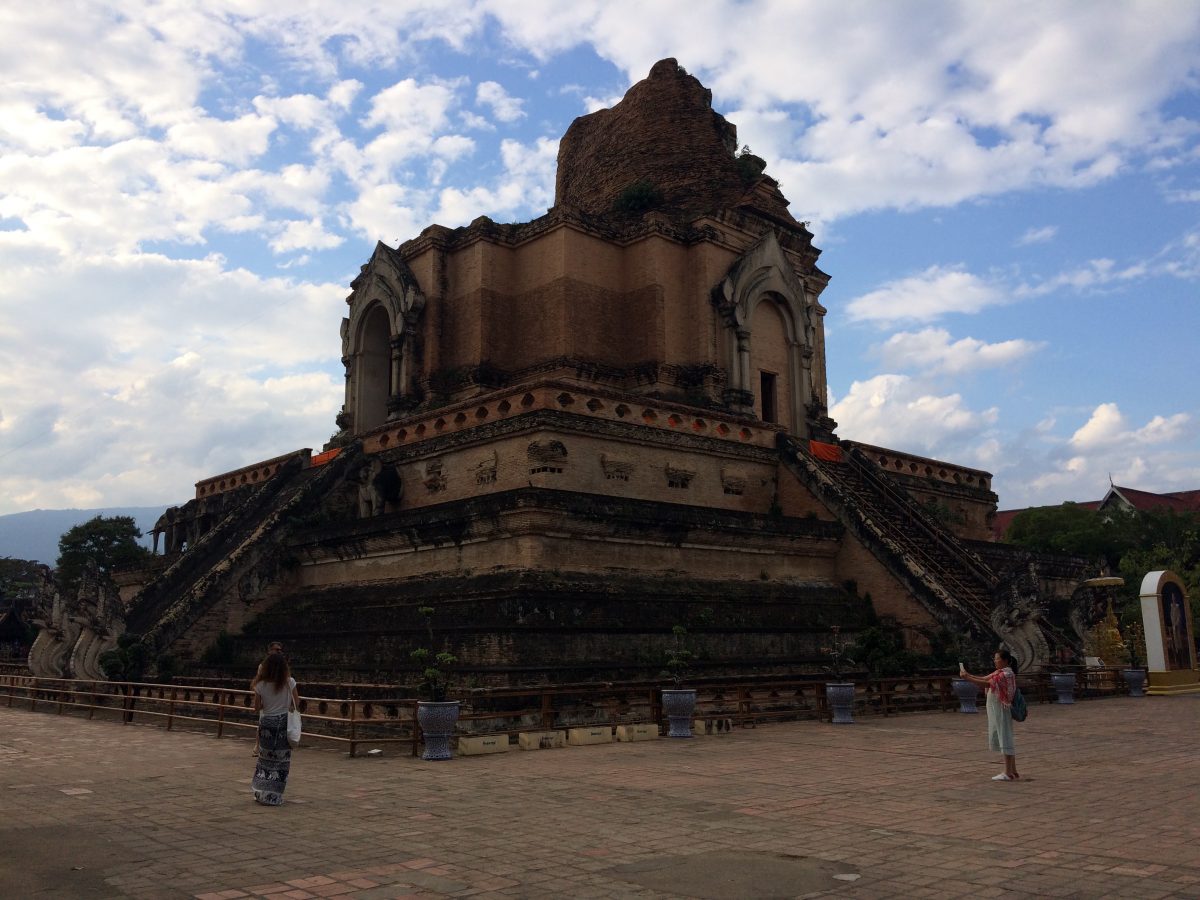 On the third day I used the free bicycle of my hostel, and cycled up and down in the old city to find some beauties, such as the Wat Chiang Man. 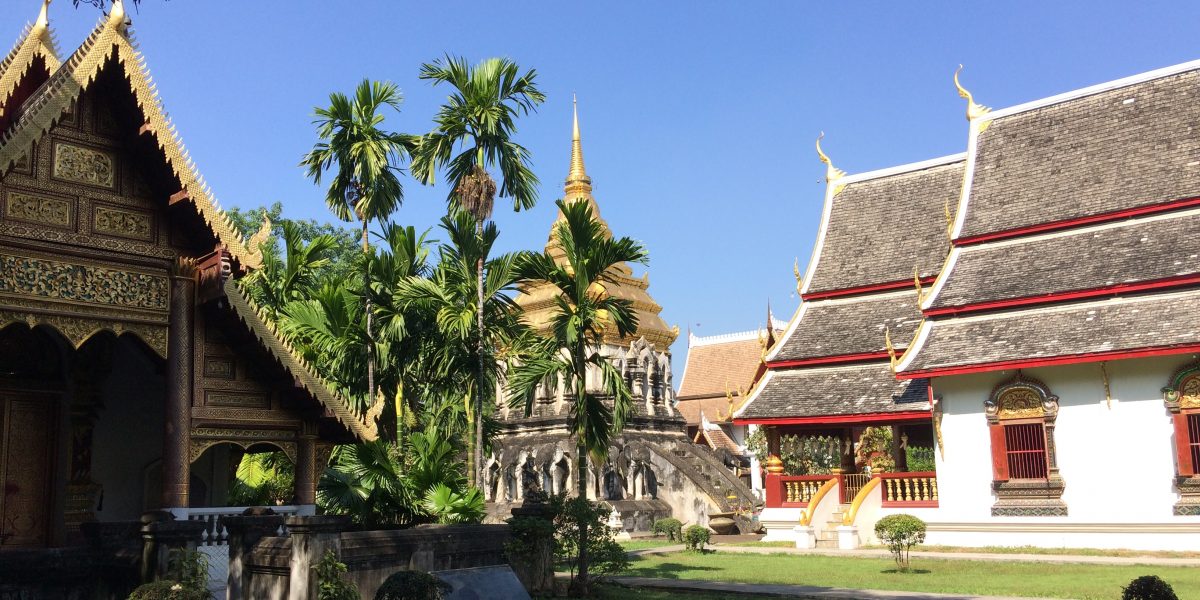 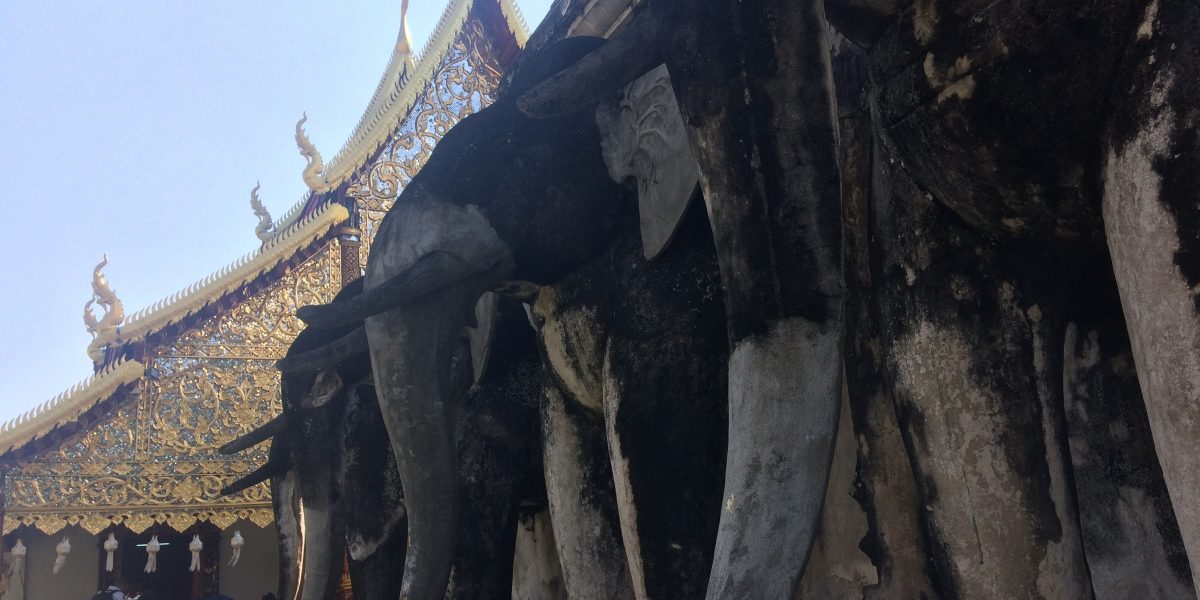 But my visit to the Wat Phra That Doi Suthep was the cherry on the top. I got the advice to come here in the late afternoon to avoid the crowd, enjoy the sunset and see the prayer of the monks. Great hint! It was amazing. The temple itself is a beauty with the golden chedi in the middle, but as the sun goes down, slowly the sky gets dark blue and in front if this magical dark background the golden statues start the glow even more. 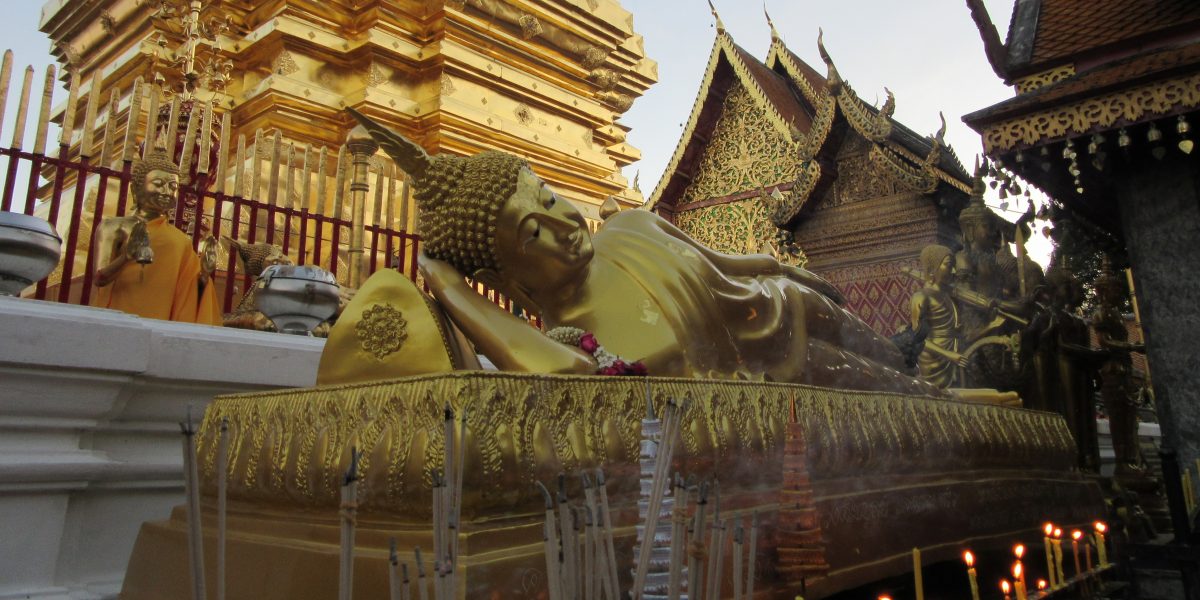 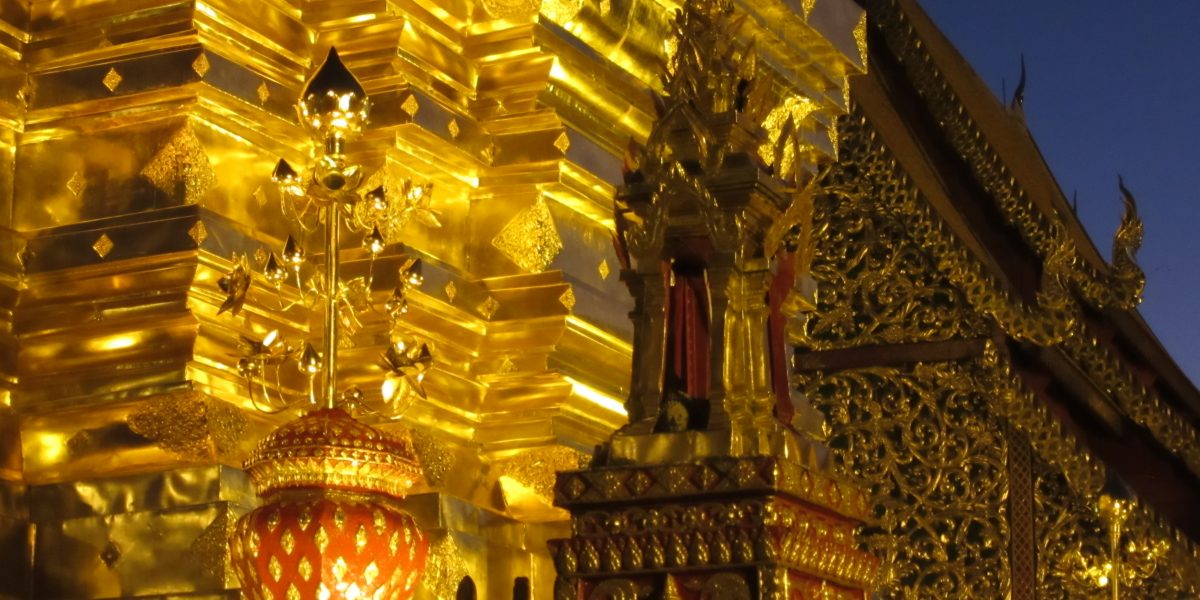 A little bit after 6 pm the monks leave the temple hall and start their prayer facing the golden chedi – observed and marvelled in silence by the tourists who remained at the site. 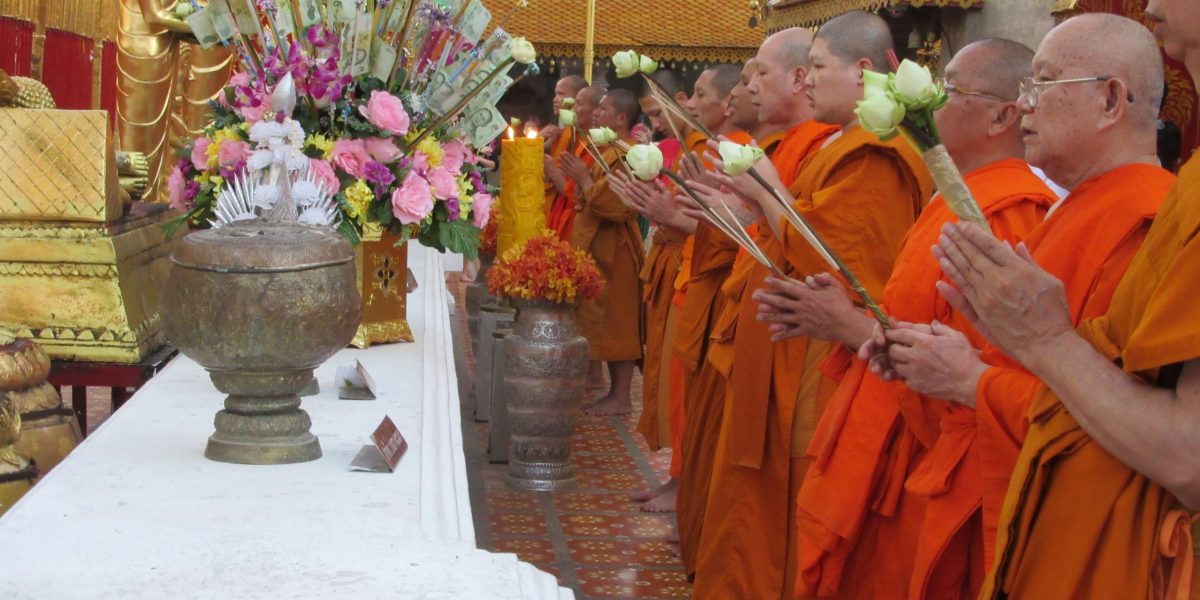 They start their circles still chanting, clockwise around the chedi, and some visitors join them too. I felt like staying there forever. Peace, admiration, gratefulness.

Still, I left the temple to join my instant friends, who were already waiting for me at the songthaew to go back to the city. The whole bunch of people, who met on the way up to Doi Suthep (Americans, Brazilians, Portuguese, Colombians, Germans – a beautiful mix) decided to go to the night market to watch a Lady Boy Show, but I took a rain check on it, and rather met a friend from Hungary… but that is another story.

Those who like buddhist temples, Chiang Mai is an endless pleasure – even if women cannot enter into some of the temples. Why not? Due to their tradition women are not clean because of having their periods and their presence would desecrate holy sites. Well, I don’t go into a discussion about how much is this argument acceptable – we don’t have to agree with it. I simply accept it as these are their rules and I can’t necessarily understand them looking at them from a western point of view. My only concern is why to pay the same amount as entrance fee as the male visitors, but this question does not need to be put out there.